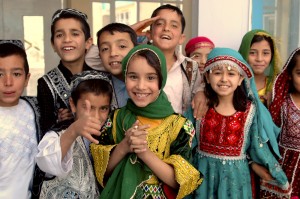 Afghan girls and boys are delighted with the additions to the Tajwar Sultana Girls School, finances by the Combined Joint Task Force Phoenix.

TAJWAR SULTANA GIRLS SCHOOL, KABUL (19 October 2008) --- Afghan children here are benefiting and thriving thanks to sustained efforts by New York Army National Guard Soldiers and a program that is helping to expand and improve their schools.

A new addition to a Kabul school was opened October 19, in a ceremony that included Afghan officials, school faculty, U.S. military officials and local contractors who completed the work.

Afghan contractors built a new school with 10 classrooms that was opened at the end of April 2008. The construction plan was coordinated with the Afghan Ministry of Education, which also assisted with the design.

"This is the greatest day of my life. I feel as though I am the mother of all these children," said Principal Rabia Abdullah. "We used to teach them in tents and now we have a school."

The Tajwar Sultana Girls School is located within the City of Kabul, Police District 4 in a village known as Kololah Pushta. More than 4,000 students, mostly girls, attend classes there in three shifts each day. The curriculum includes primary school in the morning, high school in the midday and middle school in the afternoon.

Combined Joint Task Force Phoenix (CJTF-Phoenix), based at Camp Phoenix in Kabul, has been investing U.S. funds in Afghan school and community construction and rehabilitation projects through CERP as part of its mission to support the government of Afghanistan and its people. The task force has the primary mission of training and mentoring the Afghan National Army and Police but engages in other supporting efforts to build infrastructure and communities as part of the larger effort to assist Afghanistan.

"When I first came to Afghanistan I did not know what I would focus my time on," said Lt. Col. Michael Hoblin, a New York Army National Guard officer serving as the director of CJTF-Phoenix’s Civil Military Operations office.

"After my first school opening I realized education was the key to progress. How can Afghanistan have a bright future if the children are not educated?" Hoblin said. "We have built or started construction on 47 schools throughout Afghanistan. If you look into the eyes of these children you can see hope. These kids need and deserve our help. There is progress here."

Additional projects to add a new story with 10 more classrooms at a cost of $155,000 and to make improvements to an older building at a cost of $58,000 were completed last month. Previously, many classes were held outside or under tents because an existing structure built almost 30 years ago was in poor condition and there was not enough space to meet student needs.

The faculty includes 120 teachers who have all been trained at one of the Ministry of Education’s training centers. Teachers earn between 4,000 to 6,000 Afghanis per month, which equates to about $100 to $140.

The projects have resulted in the construction of 20 new classrooms and the renovation of 30 more. While the student population has grown significantly since the fall of the Taliban, the student per classroom numbers at Tajwar Sultana has dropped from 70 to almost 35 - the recommended maximum by the Ministry of Education. In addition, the school is positioned to expand its curriculum for computer and science programs. "Education is the future of our country," said Najibullah Kamran, City of Kabul Director of Education.