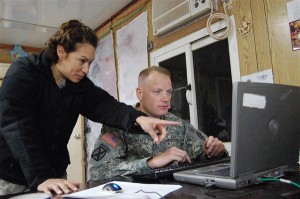 BAGHDAD- An 18-year veteran of the New York City Fire Department is achieving another veteran status here, this time as a soldier. Army Pfc. Steven P. Fitzgerald, from Floral Park, N.Y., is serving as an intelligence analyst in Iraq.

Fitzgerald has served in the fire department since 1990, following in his father‚Äôs firefighting footsteps. But the citywide battalion chief jumped at the chance to enlist in the Army after his fianc, Army Spc. Viviana B. Molina, informed him of a new Army age limit.

‚ÄúThere were so many people I knew personally who passed during 9/11, and all I did was pay my taxes and practice my golf swing,‚Äù Fitzgerald said. ‚ÄúMy goal was to do my part by coming to Iraq and serving my country.‚Äù

The decision to start an Army career when he was nearing retirement in his civilian career came as a shock to Fitzgerald‚Äôs family and friends.

‚ÄúEveryone thought I was crazy or going through a midlife crisis,‚Äù Fitzgerald said. ‚ÄúI wasn‚Äôt looking to prove anything or get attention; I just wanted to do my part, and it was worth it.‚Äù

While basic combat training and advanced individual training came relatively easy for Fitzgerald, both physically and mentally, there were a few challenges he had to overcome.

‚ÄúMy biggest challenge was working with young adults who could be my children,‚Äù Fitzgerald said. ‚ÄúHowever, I was in awe that there were soldiers here doing more at 21 years old than I ever thought of doing.

‚ÄúI also had to deal with being a lower enlisted [soldier] and having to take orders, where I was previously in a position to give orders to 400 to 500 firefighters,‚Äù he added.

‚ÄúI can‚Äôt say that I would have done the same thing if I was in his position, but I am proud that he did,‚Äù Evans said. ‚ÄúHe is very accountable, and because of his civilian job, I tend to give him more tasks and responsibilities than the average private first class.‚Äù

Fitzgerald said he plans to finish work on a master‚Äôs degree and to look into the possibility of warrant officer school when his deployment is over in six months. In the meantime, he said, he‚Äôs just proud to serve.

‚ÄúTo be able to say in June of 2009 that I am a veteran in the U.S. Army is a big deal,‚Äù he said. ‚ÄúI am proud to say that I am serving my country and have done my part, and would definitely do it again.‚Äù