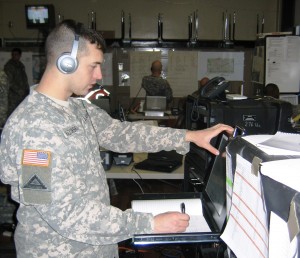 Working in eight-hour shifts the New Yorkers provided both outer and inner cordon security north of the Capitol in the Dupont Circle area of the city during the 56th presidential inauguration. The Soldiers and Airman were deputized as special police to assist local law enforcement officers at Traffic Control Points, which gave them temporary police powers in the District of Columbia.

“I am very proud to be here and to be able to support our new commander and chief,” said Airman 1st Class Marcus M. Goodridge, 105th Security Forces Squadron, Stewart Air National Guard Base. “My family is very proud of me being here, due to this being an historic event.”

“I am extremely happy with the way the Airmen and Soldiers get along with each other, morale is very high,” said Air National Guard 1st Sgt. Thomas Young, from the 105th Security Forces Detachment at Stewart Air National Guard Base. . “Some of these individuals may never get another opportunity to do something as great as this, so they are making it a very memorable moment, and I can say I am very proud of everyone,” Young added.

The road to inauguration day started at Camp Smith, N.Y. Saturday, Jan 17, for this task force, where they received a Physical Health Assessment. Once given the green light they were cleared to attend the mission. On Sunday, the team boarded buses and began their six hour journey to D.C. When they arrived at the National Guard Armory they received a welcome briefing and were sworn is as special police.

“Being sworn as special police gives Soldiers and Airman the ability to make arrests in certain situations when an Metropolitan Police Department (MPD) officer is not present”, said Capt. Mike Gottert, commander of the department’s 1st District Civil Disturbance Unit.

“The MPD and Chief of Police Cathy Lanier would like to thank all of the Guard personnel who helped make historic event possible”, he said. “It would have been impossible to handle this event without them.”

The Task Force was based at Trinity College, a 100 year old university that started as a Catholic’s woman’s college, and is still an undergraduate woman’s college with co educational graduate and professional programs.

“It was quite a scene seeing the parade of buses lined up on Cuvily Driveway, and seeing the troops marching into Trinity Center with their full packs, it was incredible,” said Pat McGuire, president of the university.

"felt very proud of Trinity to be able to host (The National Guard), and see so many wonderful women and men ready to devote their time and talent to ensuring our national security, and a smooth execution of the inauguration.” For some of these Soldiers and Airmen, an historic event like this and supporting their new Commander and Chief is a once in a life time opportunity and makes them proud to be able to participate.

Staff Sgt. Christopher Morrissey, Headquarters and Headquarters Company, 104th MP Battalion., added that it is an honor to be chosen to be at an event as significant and historic as this is.

“Besides Iraq and Afghanistan this is one of the most important missions we have been tasked with,” said Morrissey. “We assist, protect, and defend the people of the United States and our Commander and Chief is our top priority.”