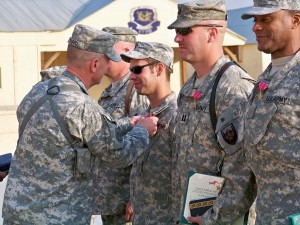 The Soldiers are mostly from National Guard units from NY, SC and other states and are assigned to Regional Police Advisory Command-Kabul (RPAC-K.) They are part of Afghan Regional Security Integration Command-Kabul (ARSIC-K) also based at Camp Phoenix.

“RPAC-K was responsible for mentoring more than 4500 Afghan National Police officers assigned to the 30 police districts in the Kabul area,” said Col. Roy Tario, from West Sand Lake, NY the commander of RPAC-K. “Our coverage area included a population of 5.5 million,” he added. “We stood up RPAC-K following the arrival of our team from NY. I was really proud to be the commander and the team accomplished a lot,” he said.

“We conducted leadership and logistical training and also worked with the police chiefs to train them on criminal investigation techniques,” said Maj. Charles Jones, a reservist from Cedar Hill, TX, the RPAC-K executive officer. “We conducted joint patrols and security missions with the ANP and often recovered arms caches, rockets and other ammunition that could have used for IEDs (Improvised Explosive Devices,)” he said.

The trainers and mentors of RPAC-K planned, supported and conducted about 25 separate humanitarian outreach efforts with their ANP counterparts to help the population and develop bonds of trust between the community and the police. “We conducted shuras (meetings) with the police chiefs and district governors, village elders and other local leaders to address problems and plan support efforts,” said Maj. Jones. “Sometimes we drew out bad guys to the meetings and may have even been able to turn some to the government side,” he added.

Nearly 1700 members of New York’s 27th Infantry Brigade Combat Team were mobilized for the CJTF-Phoenix mission to train and mentor the Afghan National Army and Afghan National Police and provide support to the government and the people.