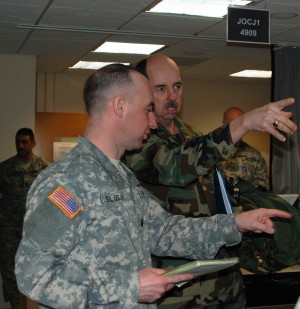 It was show and tell time for New York’s Joint Operations Center (JOC), Monday, Jan. 26, when leaders from the Massachusetts and Connecticut National Guard’s came by to see how New York runs its command and control operation.

The purpose of the visit was to see how New York’s JOC is set up, to help make a decision about upgrading its Connecticut counterpart, explained Brig. Gen. Walt Lippincott, the Director of Joint Staff for Connecticut’s Joint Forces Headquarters.

The JOC provides commanders with situational awareness and a common operating picture of what is happening, to allow effective decisions to be made, said Lt. Col. Mark Slusar, Deputy Director of Operations for New York’s Joint Forces Headquarters.

The visiting states had been discussing upgrades to their Joint Operation Centers when they heard how effective New York is and decided to accept an invitation to see how New York operated, Lippincott said.

When they were invited to come check out what New York has been doing, they took advantage of the invitation, the general said.

New York’s JOC staff had recently made changes in their operations that improved their overall efficiency.

New York’s JOC has a lot of technical capabilities it never had before. The size of the Army and Air Force staff was increased as well, which makes the new technology more effective, Slusar said.

It’s good for neighboring states to discuss their operations because they may have to assist each other, Lippincott said.

"I think both representatives from Massachusetts and Connecticut were able to gain knowledge and best practice how to set up their Joint Operation Centers in their respective states," Slusar said.