From our Families to Yours 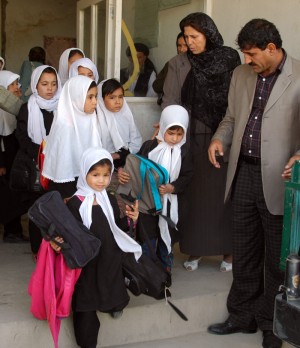 Donations from home help with Afghan mentoring and support mission

Hundreds of pounds of schools supplies, children’s clothing and shoes sent over from New York communities were delivered to boys and girls of the Afshar School in the suburbs of Kabul on 4 October by members of the Afghan National Police (ANP.)

Nearly 1700 members of the New York National Guard’s 27th Infantry Brigade Combat Team were deployed for CJTF-Phoenix to serve on embedded training and police mentoring teams, security force units, logistics teams and for the task force headquarters. Increasingly, military family members, friends, youth groups and civic organizations back in New York are taking an active role by sending donations to their deployed loved ones that are in turn used to help the Afghan people.

Clothing, foot ware and school supplies are eagerly sought. Operations that bring police to schools and villages to deliver security messages as well as gifts encourage local support for the Afghan government and improve conditions for the people.

“The Afghan National Police is the face of the Afghan government at the local level,” said Col. Gary Yaple, deputy commander of CJTF-Phoenix and the New York National Guard’s 27th IBCT from Syracuse. “Our intent is to place the Afghans first and in the lead and we support. This is their nation. These are their communities, families and children. The more support they provide, the more they build for their government. They still need our help, but much progress is being made,” he said.

The three hour mission last Saturday included 23 U.S. personnel assigned to a Police Mentoring Team with Afghan Regional Security Integration Command-Kabul and logistics task force troops. The team moved to the headquarters of Police District 5 where First Lieutenant Faisal Reza from the Bronx, Master Sergeant Michael Molgaard from Ithaca, and Staff Sergeant Deanna Bizette from Florence, SC conferred with Col. Zalmia, the police chief on the operation plan. Then a dozen officers moved out with the CJTF-Phoenix team for the school.

They set up a security perimeter and U.S. and Afghan police unloaded three trailers of donations. These were placed in a faculty office and teachers began to distribute to the neediest students.

“The donations came from various people in the Tompkins County area,” said Capt. Robert Romano from Ithaca, assigned to CJTF-Phoenix headquarters. “My mother organized the drive with support from several local church groups,” he said adding that the mother of another deployed officer, Mrs. Linda Pasto and a local chapter of “The Red Hat Society,” a woman’s group, also made significant contributions.

“Clothing was collected, inspected, packed and shipped by my mother, Marie Romano and my wife, Lana. The first load amounted to about 650 pounds,” he said. Another shipment weighing in at 1100 pounds is already on the way, he added. “The police chief and teachers seemed especially happy with a large box of children’s shoes and another one that contained winter jackets and sweaters,” he said.

Later, Col. Zalmia personally handed out school supplies, clothing and shoes. While he was doing this, he talked to the children. His message was simple - “people should not be afraid to come to the police to ask for help. The police are there for the people.”