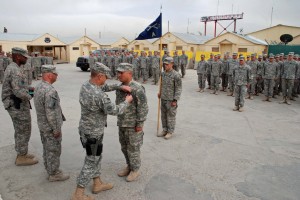 Sergeant Travis S. Smithers from Watertown, NY was awarded the Purple Heart Medal for injuries sustained in combat operations in May 2008. Captain John Shannon from Elmira, NY was awarded the Meritorious Service Medal for his service in command of an enlarged infantry company of security force Soldiers that was mobilized last year.

Last September nearly 230 infantry soldiers from New York’s 27th Infantry Brigade Combat Team were mobilized ahead of the main deployment of NY Soldiers for Operation Enduring Freedom in Afghanistan. They have now completed their tour of duty and will be returning home in the very near future.

The “SECFOR” team was built around Company A, 2nd Battalion 108th Infantry based in Geneseo, NY with additional platoons coming from NY’s Hudson Valley, Capital District and Adirondack North Country.

“You have done an awesome job since you arrived here so many months ago,” said Col. Gary Yaple, deputy commander of CJTF-Phoenix and New York’s 27th IBCT. “You were each hand selected for this assignment because of the work you did,” he said. Nearly 40 percent of the unit has served in Iraq and many from the team performed home land security duty following the 9-11, 2001 terrorist attacks in New York City and at other locations across the state.

“And, now you are going home with every one you came here with. That is an accomplishment,” said Col. Yaple. “Thank you for doing a terrific job.”

CJTF-Phoenix is part of Combined Security Transition Command-Afghanistan with the mission to mentor and train the Afghan National Army and Police, and provide assistance to the Government of Afghanistan and its people. The task force is comprised of nearly 9,500 service men and women from all U.S. branches, coalition partners and civilian professionals distributed at almost 260 Forward Operating Bases and Combat Outposts throughout Afghanistan.

Nearly 1700 members of New York’s 27th IBCT were mobilized for the mission, which is the largest number from a single state that has been deployed for CJTF-Phoenix thus far. The Soldiers came from communities across New York and also formed the largest single deployment from the New York National Guard in recent memory.