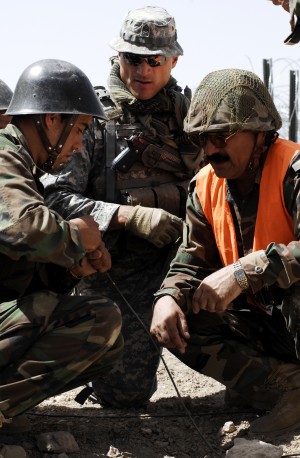 CJTF-Phoenix is part of Combined Security Transition Command-Afghanistan with the mission to mentor and train the Afghan National Army and Police, and provide assistance to the Government of Afghanistan and its people.

“I am extremely proud of every service member in the task force and the daily contributions they are making to improve the Afghan National Security Forces, support the government and help the people,” said Colonel Balfe. “It is remarkable that so much has been accomplished by our trainers and mentors, our security and logistical personnel, and the various staff sections in the five months we have been here. We are determined to make the most of the time left to us and ensure that our successors from the 33rd Brigade Combat Team from Illinois will be able to transition in smoothly, pick up from us, and keep this mission moving forward,” he said.

Nearly 1700 members of New York’s 27th IBCT were mobilized for the mission, the largest numbers from a single state thus far deployed for CJTF-Phoenix. The Soldiers came from communities across New York and formed the largest single deployment from the New York National Guard in recent memory. About 230 of these Soldiers were mobilized in September of last year while the main body was called up in January.

Hundreds of New York Soldiers are serving in CJTF-P as trainers, advisors, mentors, security-force, logistics and staff. Many have experience in state and later federal active duty after the 9-11, 2001 terrorist attacks, which were commemorated in a September 11th ceremony at Camp Phoenix. Soldiers who are also members of the NYPD and FDNY are serving here. The New York National Guard is the only part of America’s military force that served at “Ground Zero.” Roughly a third of the 27th IBCT team in Afghanistan has already served in previous deployments for Operation Iraqi Freedom.

National Guard personnel from many states serve as embedded trainers, security-force personnel, logistical and support staff, and in assignments in the task force and subordinate regional security integration command headquarters. CJTF-Phoenix VII Accomplishments since Transfer of Authority on 26 April 2008