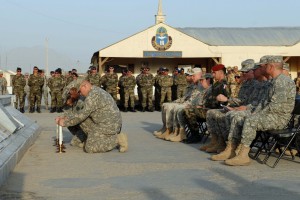 CAMP PHOENIX, KABUL, AFGHANISTAN (11 September 2008) -- Victims of the 9-11 terrorist attacks on 9-11, 2001 were remembered in an emotional ceremony at Camp Phoenix, Kabul, Afghanistan today.

The ceremony officially began at 5:16 local time with the sounding of a siren from the Camp Phoenix fire truck to match the time in New York City when the first plane struck at the World Trade Center, 8:46 a.m. Eastern Time.

The formation of troops in Patriot Square included Soldiers, Sailors, Airmen and Marines and the Camp Phoenix-based French and Romanian detachments of Combined Joint Task Force Phoenix (CJTFP.) The task force is led by the New York National Guard’s 27th Infantry Brigade Combat Team (IBCT) which saw many of its Soldiers serve at the World Trade Center site immediately following the attacks and has since deployed hundreds of troops for homeland defense missions and for combat service in Iraq. Now they are serving in Afghanistan as trainers and mentors for the Afghan National Security Forces.

Today’s ceremony from Kabul, Afghanistan is especially poignant to the Citizen Soldiers of the 27th because for many the service that began at Ground Zero has now come full-circle to the land from which the terrorist plotted and then launched their attacks.

“Seven years later we are left with vivid memories that include sorrow, anger and pride in the courage and determination shown by ordinary people and especially by emergency responders who sacrificed themselves for others,” said Colonel Brian K. Balfe, commander of CJTF Phoenix and New York’s 27th IBCT.

“The images of that day will never leave us. But what also stands out is what we discovered about ourselves. In the face of so much terror, so many Americans rose above their fears. Their Call to Duty that day was to risk their own lives, to save others,” he said.

“The fire service is made up of a unique group of individuals. It takes a special person to go running into a burning building when everyone else is running out,” said Maj. Dennis Bates, from Rochester, NY a volunteer fireman at home and at Camp Phoenix. “It is not easy for people to understand and not easy for us to explain. It is something we are, not something we do,” he said in tribute to fallen members of the Fire Department of New York.

Five serving members of the New York National Guard were lost when the World Trade Center towers collapsed including three Soldiers and two Airmen. They were firemen, police officers, emergency services personnel, a security guard and an employee of Windows on the World restaurant.

New York National Guard Soldiers served for months in New York City, at Ground Zero, bridges, tunnels, train stations and airports. They also protected nuclear power plants and the U.S. Military Academy at West Point. At the conclusion of the ceremony, a dozen Soldiers retook their service oath having recently re-enlisted in the National Guard.

Combined Joint Task Force Phoenix is assigned to Combined Security Transition Command-Afghanistan is comprised of nearly 9,500 service men and women from all U.S. branches, coalition partners and civilian professionals. Task force personnel are distributed at nearly 260 Forward Operating Bases throughout Afghanistan with the mission to mentor and train the Afghan National Army and Police, and provide assistance to the Government of Afghanistan and its people.