Buffalo Native blasting the way for peace in Afghanistan 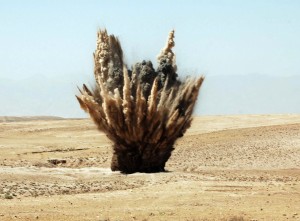 KABUL MILITARY TRAINING CENTER, AFGHANISTAN -- Buffalo, New York is a working man’s kind of town and Capt. William Snyder is proud to be one of Buffalo’s own, even those his work can be heard for miles. He is not the quiet type for sure.

Snyder is a combat engineer officer here at the Kabul Military Training Center (KMTC) and his specialty is blowing things up. “I was the guy who blew up GI Joes growing up,” said the thirty-one year old, twelve year veteran of the New York National Guard now about half way through his tour in Afghanistan. Snyder is a mentor to soldiers learning to be combat engineers in the Afghan National Army (ANA).

The graduate of Buffalo State College said he loves his work and that he feels the soldiers he mentors will know basic combat engineering when they graduate. “I love it yeah, I get to be with the soldiers and get to play with explosives,” he smiled.

Snyder left his 8th grade teaching job and his family of six to deploy to Afghanistan. He is a ready example of the sacrifices National Guard soldiers make to serve their country. He left in the middle of a school year and will be returning to the classroom next year in mid year. “A lot of the students were sad because I was leaving in the middle of the year and I had to find my replacement a substitute for his 95 students.”

As for his own family he said he gets to talk to his wife and kids regularly. “The kids are doing OK for the most part, they are handling it alright. We get to talk to each other a lot on the computer, one of the youngest was going swimming the other day and said goodbye I have to go.” Snyder’s wife Sheara-Lea is an active National Guard readiness NCO so Army life is pretty normal in the Snyder household.

At KMTC, Snyder teaches classes of around seventy students. Because of their job Snyder says his ANA troops are a bit better educated than the average soldier, being able to read and write a key fundamental. “I am proud just to be able to help them learn their jobs so they can survive in the field and help their army progress,” he said.

One of the key tasks the students must learn is how to setup an engineering obstacle designed to make a road, or in the case of Afghanistan, a mountain pass unusable to an enemy.

Snyder said this is usually the first time his soldiers have ever seen explosions with so much power. When the charge goes off, “It’s a feeling of extreme excitement,” he laughed, adding its normal for the students to “clap to show their approval.”

This is the first time out of North America for the energetic young Buffalo Bills fan and being a student of history he says he is especially proud of his service. “I feel like I need to serve, our country was founded by guys like guard guys.”

He also had a heart felt thanks for the support from everyone back home.