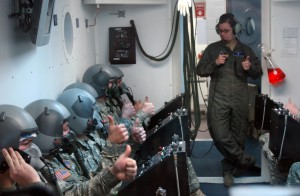 ANDREWS AIR FORCE BASE, Md. -- Four New York Army National Guard aviation Soldiers got a taste of high-altitude flying in Afghanistan, on Wednesday, Feb. 25 without leaving the United States. The Afghan-bound members of Detachment 20, Operational Support Airlift, through high-altitude training at the U.S. Air Force oxygen chamber here. The Soldiers must be able to recognize the symptoms of hypoxia, or oxygen starvation, in themselves and others in order to undertake the mission, said Chief Warrant Officer Kent Wagner, the commander of the deploying detachment. Sgt. 1st Class Mike Judge, Sgt 1st Class Tarek Warner, Staff Sgt. Scott Leslie, and Spc. Brad Provost, made it through the training with flying colors. The active duty Air Force trainers first let the Soldiers experience the feel of flying without an oxygen mask at 8,000 feet, by lowering the pressure in the oxygen chamber. Then they “flew” to 25,000 feet and repeated the exercise again. The Soldiers were instructed to take off their oxygen mask at each altitude and perform basic tasks, so they could recognize the symptoms of oxygen deprivation. Det. 20 OSD normally operates fixed-wing, turbo-prop, C-12 aircraft, ferrying VIPs and Guard personnel around the country. In mid-March they’ll mobilize ten Soldiers to deploy to Afghanistan as part of Task Force ODIN. They’ll fly C-12s designed to detect IEDs from the air. The C-12 aircraft are specifically fitted with high-tech instruments for Task Force ODIN. The acronym ODIN derives from "observe, detect, identify and neutralize". The Army put the ODIN concept together in 2006 at Fort Hood, Texas and was sent to Iraq later that year to tackle the problem of roadside explosions, which had become the main method of attacking military personnel and truck convoys. In September, 2008 Defense Secretary Robert M. Gates told Congress that he wanted to replicate the ODIN units in Afghanistan as soon as possible.

ODIN began with a small, sensor-carrying civilian aircraft, the Beech C-12, and a network of unmanned surveillance vehicles equipped with night-vision, infrared and full-motion video. This entire network of surveillance equipment was linked to infantry units and Apache attack helicopters armed with missiles and machine guns. Detachment 20 will join a company-sized C-12 aviation unit at Fort Benning. Ga. for their initial training cycle and then to Hagerstown, Pa. in order to get proficiency training on a modernized combat version of the C-12.