Mom Follows Her Son Into the Army National Guard 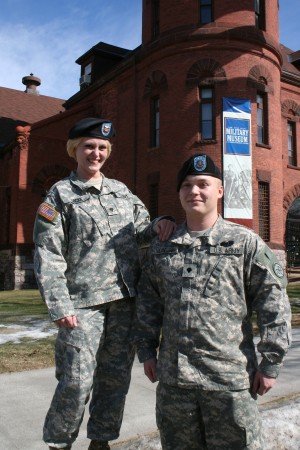 Then New York Army National Guardsman Justin Van Deusen got the shock of his life. Not only was his mother Juanita Locke there at Fort Jackson; but she was there to start basic training. Four months after he enlisted, she decided to follow her son into the Army National Guard.

"I was coming back from pass and I got a phone call from her. And I am sitting with all my friends and I had it on speaker phone, and they were all kind of in shock," the 19-year old Van Deusen recalled.

"He was quiet surprised when I told him I was there,’ I’m going through basic training,’" Locke, age 37 said. "I decided if you can do it, so can I," she added.

Now mom was just another Soldier, too. But Fort Jackson’s drill sergeants made some concessions to the parent-child relationship by letting Recruit Juniata Locke take time off from her training to watch her son graduate from Advanced Individual Training.

Today, three years later, mother and son share a military bond, as well as the tight relationship they’ve always had.

The Military Personnel Office doesn’t have any way of easily tracking how many fathers, mothers, sons and daughters and brothers and sisters share membership in the National Guard, said Charles Amoroso, branch chief at Military Personnel. But every Guard member knows that the family relationships in the Guard are tight.

Van Deusen deployed to Afghanistan with the 27th Brigade Combat Team, where he started out working in the personnel section, moved to an Embedded Training Team in ARSIC South, and finished up manning a turret machine gun with the Security Force.

"I liked it," Van Deusen said.

Mom, though, like any mother worried about her son in the combat zone. "It was nerve-wracking not knowing where he was, not knowing if everything is okay. That’s hard for a parent." Locke said.

Juanita Locke had thought about joining the military when she graduated high school in 1990. But Justin was just over a year old, and she couldn’t leave him behind. So her military dreams went on hold for 16 years.

But when Justin grew up and convinced her to let him join the National Guard at age 17, she decided there was no reason to put her military dream on hold any longer.

For Locke, who joined the Army at age 35, basic training was tough at first, but then she got into it.

"My first week of basic training was torture. I hated it. It was the worst week of my life. But then you learn to realize that it is just their way of beating you down to bring you back up," Locke said.

"Then you start doing training, doing the obstacle course and going out in the field and learning weapons and learning so much, ’she said.

Van Deusen, for his part, had no doubts about his mom’s ability to handle Army life. "I went through it. I knew she could do it," he said.

Joining the National Guard has energized her life, Locke said. Since signing up she’s turned the Guard into a full-time job, started taking college courses, and purchased a house in Gloversville. Justin and his girlfriend are moving in below her.

Occasionally, though, Spec. Van Deusen, who has more time in grade than Spec. Locke, will try to lord it over her a bit.

"He always tells me that I out rank you, so I can make you do push-ups," Locke said. "But I always have the last say in that. Since I’m his mother I will outrank him no matter what. He’ll never out rank me."