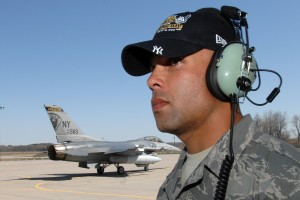 The F-16s took off at approximately 12:15 pm from Hancock Field Air National Guard Base on their flyby mission for the opening of the "New" Yankee Stadium.

"We are extremely proud of all of our New York teams and feel extremely honored to take part in this historic event" said Col. Kevin W. Bradley, 174th Fighter Wing Commander.

Maj. John Knutsen, 138th Fighter Squadron Director of Operations and Flight Lead for this formation said, "It is an honor to be able to support this flyby in helping to open the New Yankees stadium".

The 174th Fighter Wing has flown the F-16C Fighting Falcon for almost 20 years. The 174th Fighter Wing has been deployed nine times to South-West Asia in support of various operations. The last such deployment was this past summer, when the unit returned in August after supporting Operation Iraqi Freedom while being station at Balad Air Base, Iraq.

The F-16 can reach speeds of 1,500 mph and can withstand up to nine times the force of gravity (or 9 G’s). It has 9 stations that can carry a variety of air-to-air missiles, air-to-ground munitions, fuel tanks, pods and sensors.

The 174th Fighter Wing was formed on October 28, 1947 as the 138th Fighter Squadron (FS). The 138th FS was the first post-WWII Air National Guard flying unit in New York State. The unit flew P-47D Thunderbolts and was based at the former Army Air Force facilities at Hancock Field.