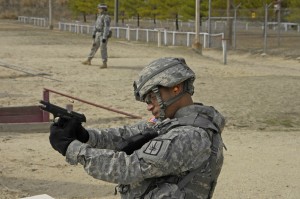 Training started for the 206th Military Police Co. as soon as boots hit the ground in Latham, New York April 4. Tasked to move the company and combat vehicles, Soldiers and all their gear 240 miles in six hours or less, the troops showed they were equal to the logistical demands.

Arriving on Fort Dix for annual training as planned, the 206th succeeded in the first hurdle and immediately set out to master the rest of the training. Concentrating on weapons and defensive tactics training throughout the next three weeks, these MPs are preparing for possible deployment in June.

Patriotism and personal reasons ran close together as reasons for joining the 206th. During a break in M-4 qualifications April 6, a few rested and talked for a few minutes.

Staff Sgt. Craig Jones, 38, from the Bronx, N.Y., a city bus driver for two years, said he joined because he realized a change was needed.

“I joined to get off the block, get away. I needed the discipline. Being a Guardsman, I never thought I would have to go to war,” said Jones. “The National Guard belongs to the State. You don’t realize you can be federalized.”

“My first deployment I was able to save money. So I wanted to deploy as soon as I could again. I found out the 206th was deploying and jumped on it.” Grinning, Jones added, “It also offered me the chance to defend my country from foreign or domestic enemies.”

Spc. Ryan Jalim, 38, from Queens, N.Y., has been a police officer with the New York Police Department five years. He was a Marine for eight years and has been with the National Guard two years.

“I went to Iraq in 2003. I joined up again because I have a new home, a mortgage, and a one year old child. I volunteered for the money. The first time I joined it was patriotic,” Jalim said.

There are as many reasons for joining as there are members of the company, but money and job security were the most popular answers. One exception was Spc. Kim Hunter, 42, of New Rochelle, N.Y. Hunter has been a New York City bus driver for the past two and a half years. He has 13 years active duty in the Army and one year with the National Guard. He joined because he wanted to be a Soldier. “I joined because all my uncles and everything were in. My mother influenced me by letting me watch war movies and things. So one day I was tired of my job as a security guard and walked down to the recruiters and they said they could put me to work tomorrow, and they did.”

The choice turned out to be the right one. Hunter said that he needed the discipline and he needed the boost the military gave to his job prospects.

“The discipline helps. I used to be a firecracker,” Hunter said. “Being in the military helped me get a job. You make a lot of friends; meet a lot of people from other jobs. The military is why I got my job with the city. They were looking for military people to hire.”

Second Lt. Stephen Groene, 22, from Long Island, chose the 206th when he became a cadet in 2006. “I think the 206th is one of the best companies in New York and I wanted to be a part of it from the beginning," he said.

Groene graduated in May 2008 with a bachelor’s degree in psychology. As a member of the Reserve Officer Training Corps (ROTC), he was commissioned an officer a day before he graduated. In preparation for command, he recently finished the Military Police Basic Officer Leadership course Fort Leonard Wood, Mo. Groene is now officially a candidate for the city of New York Police Department where he plans to make a career.

Spc. Tracy Bryant, 36, from New Windsor, N.Y., is now a dental assistant at West Point and has four years active duty in the Army and one year National Guard experience.

Working for the United States Postal Service before joining the Army, Bryant said his supervisor there was in the Marines which influenced him to join the military. He joined the Army.

“For me, it was just a change. I wanted to do something different, so I joined the military,” Bryant said. “When I joined the National Guard, I wanted this unit because I wanted to go down range, something I never did when I was active duty for four years. But, I was in Germany four years with the 118th Infantry”

“It’s like a second family, training together every month,” Jones said. “My ten-year-old son is proud to be say my dad is in the Army.”