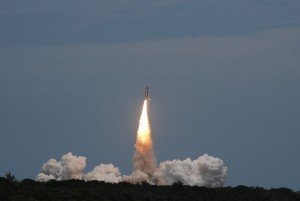 It was the hundredth time Airmen from the Long Island-based rescue wing have watched a Space Shuttle climb into orbit and stood by the rescue the crewmen just in case something went wrong. The New York Air National Guardsmen have been standing by to retrieve shuttle crew since December 1988, when NASA conducted the first post-Challenger disasters launch of the space ship.

“Every member of the 106th Rescue Wing is proud of this mission,” said Col. Michael Canders, commander of the 106th. “Our unit has played a critical role in the exploration of space for the last 20 years and we look forward to continuing to support this effort.”

The highly trained rescue crew eagerly awaited Atlantis’ lift-off from Cape Canaveral, Florida, where they remained alert and prepared to retrieve shuttle astronauts should a mishap occur that prevents the shuttle from reaching orbit. If that happened the seven member Atlantis crew would have used an escape hatch to bail out into the Atlantic.

While “King 2” stands ready at Patrick Air Force base, a short distance from Kennedy Space Center, a second HC-130 “King 1” orbited the eastern sea coast prepared to rush to the projected impact area or splash point, if necessary. National Guard personnel from the 106th Rescue Wing, based at Gabreski Field Air National Guard Base in Westhampton Beach, NY routinely practice this contingency procedure, known as Mode 8 Egress, which is essentially a parachute descent to safety.

Should an eject happen, the shuttle crew would be spread out roughly a mile apart given the speed the shuttle would be traveling as the astronauts exited the shuttle. Once located, the pararescuemen, known as para-jumpers of PJ’s for short, deploy in two teams via parachute, along with a Zodiac inflatable boat, to retrieve the astronauts, explained Canders.

“I am always grateful for the outstanding job the 106th Rescue Wing does for NASA’s Shuttle launches. They are a critical part of our overall launch contingency planning and I am absolutely certain that if called on, they would perform their job in a flawless manner,” said NASA Launch Director Mike Leinbach.

“Although we’re ready, we’re relieved we don’t have to rescue the astronauts. It’s a mission you train for and hope you never have to execute,” said Lt. Col. Jim Kelley, 106th navigator and King 2 AIRBOSS or mission commander, responsible for controlling the rescue package and helicopter refueling plan for this mission.

The PJs on King 2 are from the 129th Rescue Wing, Sunnyvale, California, filling in for 106th PJs deployed forward to Spain, on-site to support a Transatlantic Landing Site should the shuttle need to land there.

Knowing the PJ’s are close by is important, said Air Force Col. Lee Archambault, who commanded a Shuttle mission in March 2009 and flew on another one in 2007.

“Because of the amount and level of egress training and rescue procedures we receive, we know we are well taken care of should we need to get out of the vehicle if the worst of the worst happens”, Archambault said.

“We very much appreciate the support of the 106th Rescue Wing and all the rescue personnel on station throughout the world, without your support we couldn’t do what we do, Archambault said.

The New York Air National Guardsmen have been standing by to retrieve shuttle crew since December 1988, when NASA conducted the first post-Challenger disasters launch of the space ship.

The Shuttle had been redesigned to include an escape hatch, which would allow crewmembers to exit the spaceship in an emergency. Rescue crews were now needed to locate those downed crewmen and pluck them from the waters off Cape Canaveral. The 106th Rescue Wing volunteered for the mission, developed and validated the astronaut search and rescue procedures, and has been there for nearly every shuttle mission since, said Col Robert Landsiedel, the wing’s vice commander.

A Rescue Wing Pararescuemen is a personnel recovery specialist, with emergency medical capabilities in both humanitarian and combat environments. PJs deploy in any available manner, to include air-land-sea tactics, into restricted environments to identify, extract, treat, stabilize and evacuate injured personnel.

They must maintain an Emergency Medical Technician - Paramedic qualification throughout their careers. With this medical and rescue expertise, along with their deployment capabilities, PJs are able to perform life-saving missions in the world’s most remote areas.

Secondary mission capabilities include performing tactical delivery via airdrop or airland of pararescue specialist teams, small bundles, zodiac watercraft, or four-wheel drive all-terrain vehicles; and providing direct assistance to a survivor in advance of the arrival of a recovery vehicle. Other capabilities are extended visual and electronic searches over land or water, tactical approaches and unimproved airfield operations at day or night, using night vision goggles. A team of three pararescue specialists, trained in emergency trauma medicine, harsh environment survival and assisted evasion techniques, is part of the basic mission unit crew complement.