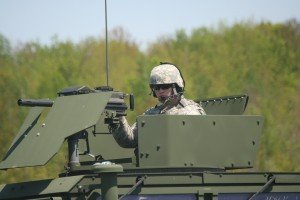 New York Army National Guard Private 1st Class Jerald Russell from the 206th Military Police Company mans the gunner position during reactions to an Improvised Explosive Device (IED) while training at the New York State Emergency Preparedness Center in Oriskany, N.Y. on May 13. The Army National Guard Soldiers completed their IED training as part of their preparation for mobilization and deployment to Iraq later this summer. Photo by Lt. Col. Richard Goldenberg.

More than 160 Military Police troops preparing to mobilize in June for deployment to Iraq learned techniques and tactics to identify, react to and defeat the IED threat.

Training for the Citizen Soldiers was provided by a cadre of instructors from the U.S. Marine Corps Engineer Center of Excellence. The trainers in the IED defeat team came from Camp Pendleton, Calif., to demonstrate IED tactics used most commonly in Iraq or Afghanistan and ways to defeat them.

“What they get in the classroom, what they get on the training lane is the same standard we have for every Soldier or Marine who is heading downrange,” said Chris Nelson, senior technical instructor from the Explosives and Obstacles Branch.

The training team was provided by the First U.S. Army for the 206th MPs as part of the predeployment training, the unit’s final task before its mobilization in late June.

“This was our culminating event for our premobilization year,” said Capt. Kevin Manion, 206th MP Company Commander. “With this done, we’re ready to go.”

The unit is equipped with the latest Military Police equipment, including the M1117 Armored Security Vehicle and the M1151 armored humvees, similar to the vehicles used in Iraq. The ASV, as it is called in the Army, is employed as a convoy escort vehicle.

The Soldiers completed their three-day training with an IED reaction lane, where the troops negotiated a 3-kilomter long IED training range to better prepare the MPs to respond as a team to recognizing and responding to roadside bomb threats and attacks.

The training at the former Oneida County Airport provides sufficient maneuver space and resources to the company training. The State Emergency Preparedness Center utilizes the existing buildings, hangars and terrain as a location to train first responders and law enforcement.

Many of the company’s noncommissioned officers are former Iraq veterans from deployments in 2003 or 2005. Those veteran Soldiers are now the foundation of the company’s leaders teaching the newest members what to expect and what right looks like.

“In 2003 we didn’t have any of this,” Sgt. Paul Bonificio said. Bonificio deployed to Iraq in 2003 with the 105th MP Company during the initial liberation of Iraq.

“This training really helps,” he said. “It was very realistic and we’re gonna be a lot more aware,” Bonificio said.

“Here, if you don’t pay attention to training, there is a real price to pay when you get in theater,” Nelson said. “You can be killed.”

The Marine Corps training team has provided this mobile training package for a dozen Army National Guard units so far, Nelson said, with another dozen already on the schedule.

“They’re definitely learning a lot about themselves, about their leadership ability, in this environment,” Manion said. “They see their mistakes here and they can learn from them.”