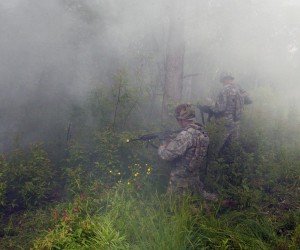 Soldiers of the 442 Military Police Company use smoke to conceal their location while looking for an insurgent during a dismounted patrol on Fort Drum on June 10.

FORT DRUM, NY -- It’s early afternoon in an Iraqi village and the 442 Military Police Company just started their dismounted patrol, when out of no-where they receive indirect fire and the ground rattles beneath them.

The Soldiers run to find cover as their team leaders try to get accountability of each member on their team to make sure no one is hurt.

Fortunately, this is only a training exercise and the Soldiers are not under attack. They are at Fort Drum experiencing Military Operations in Urban Terrain (MOUT) and what to do should they be out on a patrol and are suddenly placed in harms way.

"Soldiers need to know what is going on, especially when the bullets start flying, they need to know where to be and what to do," said Corp. Colin Stewart, an observer, controller and trainer (OCT), from 1st Battalion 69th Infantry. "We are here teaching them basic skills, giving them an idea of what they have to do, should something happen while out on patrol."

This challenging two hour scenario started out with the squads reacting to indirect fire and what they have to do to stay alive and focused. Later, they ran into an obstacle and what needed to be done to maneuver through it while being fired on and having a mortar explode.

"We are learning how to react to certain situations like being shot at." said Spc. Brittany A. Boyd. "We are getting hands on training and it almost felt real life."

After getting through the obstacle, the next part of the scenario put the squad under attack from two automatic weapons and the Soldier’s had to break contact.

"Communication is the key, without it we really don’t have anything," said Lt. Robert Thorne, the442nd’s executive officer. "Communication is being stressed here, and how important communication is, each team must talk to each other to make sure the correct information is given up and down the chain."

From that scenario they moved into a small urban area where they were hit by sniper fire. The Soldier’s had to conduct a 360-degree security watch and tend to a wounded team member, while at the same time call in to higher headquarters to have the wounded Soldier evacuated for medical treatment.

"The MOUT training we received was challenging," said Staff Sgt. Brendan J. Carey. " It gave us a chance to learn how to work together as a team, and find out what each of us is capable of, and to get us ready for mobilization."

"As a light wheel vehicle mechanic I don’t get the opportunity to do this type of training everyday," said Sgt. Sheila P. Robinson, an Iraqi veteran of the company’s 2003-04 deployment.

"The training that we are learning today is very important especially when we get to Iraq so we all get home safe, no matter what job we have while deployed," she added.

Lt. Tara Dawe, the 442nd’s commander, said that this is just part one of their pre-mobilization training for Iraq, which will be at some time in the future.

At this time in their training each Soldier is at the crawl, walk stage, and before they leave for Iraq they will be at the run stage. After completing all ten stages of this scenario, each Soldier will have a better understanding of what each other is capable of and how to react should they be fired on.

"I have never experienced a unit that once they found out they were activated for mobilization was so highly motivated to do the right thing for their country," said Dawe. "I have one of the most highly motivated and best comradely units in the National Guard and I am proud to be their commander and serve with them."