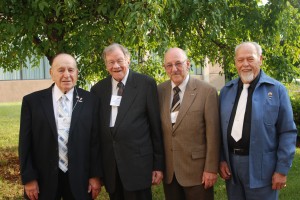 42nd Infantry Division veterans Sidney Shafner, Burchard Neet, Richard Marowitz, and Frederick Krinkler reunite at the Rainbow Division Veterans Foundation’s 65th Annual Reunion on July 12, 2009 to recall their past experiences while serving together during WWII. The four veterans were part of the 22nd Intelligence and Reconaisssance Regiment as point scouts who led fellow troops in the liberation of Dachau in April 1945. (Photo by: Private 1st Class Rachel Sanzo)

Dayton, OHIO--Over 200 veterans of the WWII 42nd Infantry Division, swapped war stories and memories as they celebrated their 65th Anniversary, July 7-11, 2009. “Some people get out of the Army and want nothing more to do with it, yet, some build relationships and camaraderie,” said Richard Tisch, who served with the 392nd Field Artillery. A highlight of the reunion was a memorial service hosted by the 42nd Rainbow Division Memorial Foundation. “The service does not celebrate war, rather it honors the brave men and women who paid the ultimate sacrifice, their lives,” Tisch said. "These veterans want to share their stories and experiences with today’s Soldiers to ensure the legacy of the Rainbow Division survives," said Captain Benjamin Tupper, who represented today’s division Soldiers at the reunion. "These old Soldiers are anxious for news of the modern Rainbow," Tupper said. A recurring recollection of the veterans was the liberation of the infamous Dachau Concentration Camp on April 29, 1945. “We had no idea Dachau was a concentration camp,” said Richard M. Morowitz, a-then-19-yr. old Jewish-American, who served with the Rainbow Division’s 222nd Regiment Intelligence and Reconnaissance section. “We didn’t even know what a concentration camp was.” Federick “Fritz” Krinkler, a German-American also with the 222nd Regiment, and close friend of Morowitz, admits he was torn between his German heritage and American citizenship when he arrived at Dachau. Fritz arrived at Ellis Island from his hometown of Stuttgart at age 14. He went on to serve the Rainbow Division. Arriving at Dachau he realized his duties might require a lot more than translating. Fritz asked Morowitz, “What do I need to do? I can’t do this, these are my countrymen and possibly my family.” “The first time they shoot in your direction you’ll change your mind,” Morowitz had responded. About 30,000 Jews and other enemies of Hitler died at Dachau, one of the first camps to be liberated in the closing days of the war. The next day, Morowitz obtained one of the war’s great souvenirs when German informants offered to lead the intelligence section to Hitler’s “secret location” in Munich. Three jeeps, 12 Americans, and two German spies drove the nine miles to Munich from Dachau and pulled up before Hitler’s house in the city. “A couple of us got to Hitler’s house and banged on the door. The door was opened by Hitler’s house keeper who asked ‘Why is everybody so mad at Mr. Hitler, he’s such a fine man.’ ” As Morowitz searched a bedroom he found a shinny black top hat in an empty closet. “I pulled it from the shelf and when I looked inside, in big-bold gold letters were the initials A. H. and I remember leaping from the chair where I stood on the hat and jumped up and down upon it, repeatedly. Afterwards I looked down and realized the top hat was collapsible.” “I laughed uncontrollably, so much so, my laughter caught the attention of the Soldiers in the other room. Shortly after I heard Hitler committed suicide. It was a good day,” Morowitz said. More than 60 years later, he still has the battered top hat. Krinkler’s most memorable encounter came after the German surrender on May 8. “German soldiers were retreating. My job was to take them to prisoner of war camps. We were screening for S. S. personnel--killers, special troops. I was on a dirt road on a motor cycle. I saw two German-Army vehicles coming with their lights on. The vehicles approached me and stopped. A German captain got out of the vehicle. He asked me in German: ‘Where can I turn my soldiers in?’ “I responded: ‘don’t you recognize me?’ ” “There was a long pause ..., then the German captain asked me: ‘are you Frederick’s boy?’ ” “Yes.” The German captain was Krinkler’s long-lost Uncle.