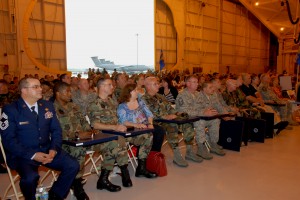 Members of the 105th Airlift Wing and their families wait to be honored on Sunday, August 2, during the Wing’s first Hometown Heroes recognition event.

261 airman and former members of the 105th Airlift Wing were honored here Sunday as part of the Hometown Heroes Salute program. The airmen were being honored for deployments in support of contingency operations since Sept. 11, 2001. The 90 minute ceremony was held in hanger 102 among hundreds of guests that were there to honor friends and family members. Brig. Gen. Verle L. Johnston Jr. commander of the 105th AW addressed the honorees and said, “It is a well deserved demonstration of our honor and respect for your contribution and sacrifices.” Besides airmen the program also honors their family members for their sacrifice during deployments. Spouses received a pen and pencil set and children were presented with dog tags. “I felt it was more important that they recognize the family members more than the military,” Tech. Sgt. Raymond Lucca a member of the 105th AW and recipient said. He added that deploying is part of the job, but he can’t imagine what it must be like for family members. They carry on day to day activities while worrying about their loved ones, who perform their duties in harm’s way. They deserve a lot of the credit, Lucca said. The wing has deployed airmen all over the world to defend freedom wherever their nation calls them to. “The 105th Airlift Wing has an unbelievable reputation, a great reputation earned over time,” Maj. Gen. Joseph J. Taluto the adjutant general of the New York National Guard said.