The Newest Member of the 4,000 Flying Hours Club 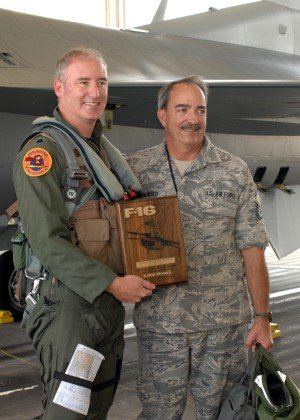 August 8th 2009 marked a significant achievement in the career of a highly decorated and skilled aviator who in his words "never had a job" in his Air Force life.

"I have often joked that I have never considered doing what I do as a job. For me being a pilot in the F-16 is the best occupation anyone could ever have. I absolutely love it! The thrill I feel taking-off is the same for me today as it was on my very first take-off. It is absolutely fantastic!" said Lt. Col. Brenton.

Lt. Col. Brenton became only the 25th F-16 pilot in the world to pass this astonishing milestone and only the 22d American pilot to accomplish this incredible feat.

As a student in Undergraduate Pilot Training Lt. Col. Brenton finished at the top of his class earning the "Commander’s Trophy" as well as getting his first choice of aircraft. At the time, the F-15 Eagle was the most coveted choice; however Lt. Col. Brenton wanted to fly the F-16 Fighting Falcon (or "Viper" as pilots refer to the aircraft) instead. The reason was simple he wanted to fly a fighter that would perform any kind of mission; be it air-to-air or air-to-ground.

"I wanted to do it all. Selecting the F-16 was the best decision I ever made, because the F-16 challenges me with every fighter mission the Air Force performs. Whether it’s air-to-air, air-to-ground, Close Air Support, SEAD, Forward Air Controller, Combat Search and Rescue, etc. - "I have had to learn each one of these missions and perform them in combat throughout the world" said Brenton.

He credited the 174FW Maintenance Group, who in his words, "are the best maintenance professionals in the U. S. Air Force". He could always be confident that when that crew chief saluted him and turned over responsibility of the aircraft, that he was getting the finest F-16 in the U.S. Air Force’s inventory. This type of support was critical in Lt. Col. Brenton achieving this milestone, but without the support of his family it would have been impossible.

His wife Renee and two daughters Jennifer and Rachel are his biggest supporters as they have supported his very demanding and sometimes dangerous job. They have shared in all of his triumphs and challenges as he has progressed through his career. "I wish I could take all three of them up with me to experience what I do. Because they are the reason that I can", said Brenton.

Lt. Col. Brenton talked about one of his more harrowing experiences he had as a young 1st Lt. while he was flying from Germany to Turkey in support of an Operation Northern Watch mission. He was over the Mediterranean Ocean when he had a trapped fuel problem, basically his aircraft was out of gas, so he would have to divert to a foreign country. He contacted the tower, but was denied permission to land - the runway had just shut down due to another emergency aircraft. With fuel running low, he had to make a decision - either bail out or find somewhere near the runway to put the jet down. He instructed the tower that he was coming in and to clear the taxiways for a landing zone. While ground crews frantically cleared the taxiways he came in on fumes to a successful but white-knuckled landing on an uneven and precariously narrow surface between numerous other aircraft.

"It was experiences like this that helped me to be a better pilot. It taught me not to panic and to stay level-headed so I could make the best decision possible. Inevitably things will happen in your flying career, you just need to remain calm and solve the problem," said Brenton.

"It has been a privilege to fly this aircraft and to be associated with some great people who have helped and supported me throughout my entire career", said Brenton.

Lt. Col. Brenton’s career spans more than 21 years, 14 of those years were spent on active duty; he joined the 174FW in 2002. He has been on more deployments then he can count and has flown combat missions in Afghanistan, Bosnia, and Iraq. He came to the 174FW from Nellis, AFB where he was an instructor for the Weapons Instructor Course, the U.S. Air Force’s "Top Gun" school for fighter pilots.