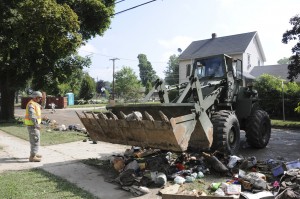 Staff Sgt. Greg Ciszak directs loader operator PFC Gable. PFC Gable resides in Gowanda with his grandmother, they had little damage to their home but their extended family uncles, cousins and friends were devastated with five plus feet of water in their basements that caused thousands of $$ worth of damage. "I’m glad to be down here, in a position to help my family and the community,"said Gable. (Photo by Senior Airman Peter Dean, 107th Airlift Wing)

Members of the New York Army National Guard’s 152nd Engineer Support Company stood behind the Governor as he spoke to a gathering of press at the site of the Emergency Operations Center where local, county and state agencies were gathering to provide support to the stricken community. About 40 troops arrived at the scene with dump trucks and front end loaders only a short time before their state Commander-in-Chief who came to see the disaster sites for himself.

The Governor said he called on the Guard because the situation required their skills and capabilities. “The damage here is heart wrenching and I am going to do everything I can to help the people here,” he said.

“In my time in the Guard, I have certainly seen worse disasters but for the people in this community the situation is very bad,” said Capt. Jeff Miles, commander of the Buffalo-based 152nd. His unit was alerted on August 11th and, along with a deputy, he arrived in the village of Gowanda early on the 12th to see the situation and coordinate with state and local officials for the arrival and deployment of his team. What he saw were roads covered with slimy mud, broken pavement, trees and other debris and piles of mud encrusted furniture and appliances that home owners had begun placing along the curbs as part of their clean up efforts.

“Our mission will be to clear the mud and debris from the streets so that both the authorities and the people can move about safely,” he said. “Eventually, the accumulated mud and debris will also become a health hazard, especially if it’s contaminated by sewage and other materials,” he added. “We will be working closely with public works staff and state and county coordinators.” Heavy rains ranging from 2 to 6 inches struck the area south of Buffalo on August 7 and 8. The rain coupled with the already saturated ground and brought heavy flooding in portions of Western New York. The towns of Gowanda and Silver Creek, located along the Cattaurgus Creek, near the Cattaraugus-Erie County line were inundated with three and four feet of driven water that swept away cars and mobile homes, damaged home foundations and businesses and caused extensive property and structural damage. Receding waters uncovered scenes of devastation the community was unprepared for. The Governor declared Cattaraugus, Chautauqua, and Erie Counties as state disaster sites.

Because flood waters also damaged and polluted the local reservoir, a boil-water order was issued for the area and the Guard engineers have also been given another mission.

“We have been asked to clear a new road to the reservoir so that pipes can be run to a clean water source,” said Brig. Gen. Patrick Murphy, director of the Joint Staff at the New York National Guard state headquarters who also came to Gowanda to see the damage. “This is a joint response of local, county and state resources,” said Gen. Murphy who, ironically was in Buffalo leading a planned emergency response table top exercise with local civil authorities as part of the Vigilant Guard program when the disaster struck.

“Many of these troops have already served in either Iraq or Afghanistan,” said the general. “We are glad to be able to help our communities when they need us,” he added.