Eevnts in Albany Area and on Long Island 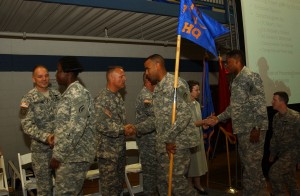 Soldiers of the 3rd Battalion 142nd Assault Helicopter Battalion, based in Ronkonkama, are greeted by the Brig Gen. Steven Wickstrom, commander of the 42nd Infantry Division, and col Michael Bobeck, commander of the 42nd Combat Aviation Brigade during Freedom Salute ceremonies held on Sunday, Sept. 13 at St. Joseph’s College in Patchogue. The Freedom Salute ceremony recognizes National Guard Soldiers contributions in Afghanistan and Iraq. The 3-142nd served in Iraq in 2008/2009, returning in May.

LATHAM, NY -- The 300 Soldiers of the New York Army National Guard’s 3rd Assault Helicopter Battalion 142nd Aviation Regiment were honored for their ten months of service in Iraq, Sept. 12 and 13 at ceremonies held in the Albany area and on Long Island. “This battalion was like the post office, we delivered every day, every week and every month that we were in theater,” Lt. Col. Albert Ricci, the battalion commander.

Ricci praised his Soldiers and admitted that there was not enough time to thank every Soldier for making their mission a success.

He began both Freedom Salutes by having his Soldiers stand and say, in unison, “Let it be said” to which he would reply, “Let it be done”.

He explained that it was the Battalion’s motto because from the time they arrived in Iraq, things were changing so fast that there wasn’t always time to put things out in writing or in an operations order, it simply had to be said and executed and that’s how they went about their business.

For Soldiers in Company A and D, and a detachment of Headquarters and Headquarters Company in Latham, a Freedom Salute ceremony was held on the rustic campus of nearby Sienna College in the Marcelle Field House.

The Soldiers in Company E and B,and Headquarters and Headquarters Company from the Ronkonkoma, Long Island facility, held their Freedom Salute on the campus of St. Joseph’s College in Patchogue - the same site they departed from more than a year before.

Soldiers received flags and other items in honor of their service, as did their family members.

The battalion mobilized in May of 2008 for service in Iraq and deployed with 20 UH-60 Blackhawks from the New York Army National Guard, and picked up an additional 10 Blackhawks after arriving in Iraq. At that time, the Battalion was more than 400 Soldiers strong, but it didn’t stop there.

The 3- 142nd was assigned another 27 helicopters in the form of a medical evacuation air ambulance company with twelve more Blackhawks, and two active duty aviation companies with 15 of their Blackhawks and additional Soldiers for those units.

In all, the 3-142nd’s ranks swelled to more than 700 Soldiers, almost making it a brigade size element.

“When we received these augmentees, there was no additional staffing of senior NCO’s and officers to help us perform our mission.” Ricci said. “We were nearly double the capacity that we were meant to handle, but we did it and soon this unit gained the reputation of being very reliable and responsible in supporting the troops of Task Force Jester.”

The battalion was attached to the 34th Combat Aviation Brigade in the Baghdad area initially and was then moved to southern Iraq to provide support for the 10th Mountain which was replacing British troops in that region, thus supporting yet another Task Force other than Task Force Jester.

In a swiftly changing tactical environment, the success or failure of the mission is on each soldier deployed. Chief Warrant Officer Jeff Martin from Company A explained that, “In the beginning, it was very hectic but it was manageable. Most of the day-to-day routine was invisible to the rest of us. The senior leadership kept us well informed.”

In conclusion of both ceremonies’ Ricci revealed that he had two major concerns for the Battalion and those were that he wanted their mission to be done to the best of everyone’s ability to support the troops and the mission and that he wanted everyone to come home who left with the Battalion.

“I’m proud to say that those two things were accomplished,’ Ricci told the Soldiers and their families.