Army Scouts Walk Same Path: U.S., Japanese Discover that No Matter the Uniform, the Mission is the Same 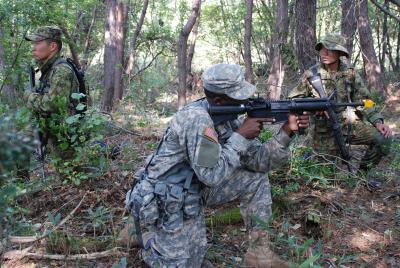 AIBANO TRAINING AREA, JAPAN (10/15/2009)-- From the time New York Army National Guard members of 1st Battalion, 69th Infantry Regiment’s scout platoon arrived here, they literally hit the ground running. Their duty as scouts is to get the information, and to deliver it fast.

"As scouts, our job is to gather intelligence for our higher-ups and to relay it in real time on the battlefield," said Staff Sgt. Ryan Bhoorasingh, the scout platoon leader for the 1-69th Headquarters Company from Queens, New York.

The scout platoon, along with members of the Japanese Ground Self-Defense Force, gathered at the training area and conducted scout training, October 14, 2009 as part of exercise Orient Shield.

The exercise encourages long lasting professional engagements, relationships, good will, and understanding in order to improve and sustain bilateral operations and procedures.

"The Japan Ground Self-Defense Force welcomed us and seemed very willing to learn," said Bhoorasingh. "I’ve learned a few things from them since we’ve been here."

The U.S. and Japanese soldiers exchanged knowledge and compared techniques in fire team movement, moving in stacks as squads, and conducting reconnaissance missions in the battle zone and en route to their objective. And although the techniques and equipment used on both sides may have differed, many soldiers discovered that the mission of a scout is a universal one.

"There’s a bond between scouts of any nationality, it doesn’t matter what country we’re from," said Spec. Pablo Acosta, a scout platoon member of the HHC 1-69th from Manhattan, New York. "A lot of our training standards are the same, and we all have a common goal in terms of our mission and what it entails."

Through conducting the scout training, the U.S. Soldiers learned how to accomplish their mission, and were able to experience the dedication and hard work shown by their counterparts.

"The Soldiers loved it on both sides. The fact that we worked together, hand in hand with the Japanese soldiers made the communication barrier fade away very fast," said Bhoorasingh. "It’s been a great opportunity being here and working with such dedicated Soldiers."