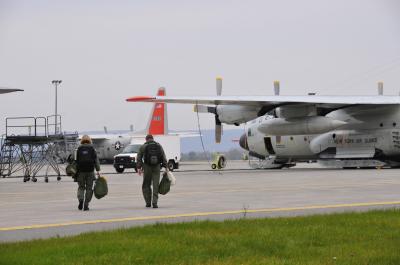 “Today we’re taking one of the first planes down to Antarctica,” said Lt. Col. George Alston, aircraft commander. “We will fly to California then to Hawaii then to Pago Pago where the recent tsunami was. From there, we’ll go to New Zealand, and from there to Antarctica where we’ll start the Operation Deep Freeze season.” The 109th ‘s ski-equipped LC-130s will be flying in support of National Science Foundation research across the Antarctic, as part of Operation Deep Freeze, the U.S. Military’s logistical support for Antarctic research.

This season brings a lot of firsts for the crews. The early deploying aircraft will support the National Science Foundation’s Western Antarctic Ice Sheet Divide Ice Core project. This project involves drilling ice cores to establish a climate and greenhouse gas history for the southern hemisphere.

“We’re hoping that with the radar is a faster turnaround in the amount of time to check on a site,” said Capt. Daniel Marchegiani, co-pilot. “The radar will determine where the crevasses are and we’ll be able to put scientists into that location much sooner than having to wait a whole year. Safety is always the first and most important thing. Being able to see where these things are before we touch down on the snow or before we even attempt to try and get into a different area of the continent is extremely paramount to what we do.”

And according to Maj. Joseph DeConno, chief of Antarctic Operations, in the middle of the season, crews will be going from using two runways to single-airfield operations.

“It’s an aggressive schedule where we’re testing a new concept of single-airfield operations, which we haven’t done in previous seasons,” he said. “The second half of the season, we’re moving all operations out to Pegasus Field for the first time and not using Willie Field. We’re optimistic we’ll do it safely and crews, as usual, will do their best to get the job done.”

The 109th Airlift Wing, the only unit in the United States military equipped with ski landing gear, has provided airlift support for the National Science Foundation’s South Pole research since 1988. Since 1999 the unit has been the sole provided of this type of airlift to the National Science Foundation and United States Antarctic research efforts.

In 1999 a crew from the 109th Airlift Wing made a daring rescue of Dr. Jerri Nielsen, a staff member at the Amundson-Scott Station at the South Pole who was suffering from breast cancer. An LC-130 from the wing landed in bitter cold, far earlier in the season than they normally fly, to retrieve the doctor.

In 2008 another 109th LC-130 rescued an Australian researcher who had broken his leg in an accident and flew him to Hobart, Australia from Antarctica.