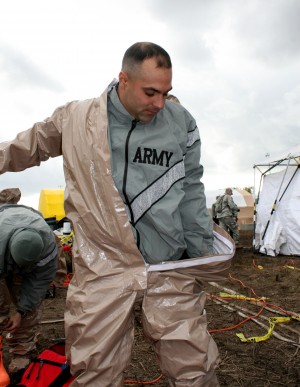 TONAWANDA, NY -- While it seems like an odd wardrobe choice, the Massachusetts National Guard CERFP team members say their physical training uniforms are well-suited for their mission: to find, decontaminate and evacuate disaster victims.

The Massachusetts CERFP team is one of several such elements taking part in Exercise Vigilant Guard, a joint training opportunity for National Guard and emergency response organizations to build relationships with local, state, regional and federal partners against a variety of different homeland security threats including natural disasters and potential terrorist attacks.

A rubble pile at the Spaulding Fibre Site in Tonawanda is being used to simulate a building destroyed by an earthquake, and CERFP teams are tasked with rescuing victims from it. The acronym CERFP stands for Chemical, Biological, Radiological/Nuclear, and Explosive (CBRNE) - Enhanced Response Force Package, and team members must don decontamination suits, gasmasks, rubber boots, rubber gloves and hardhats before they mount the rubble pile to find and decontaminate casualties.

While they stood out among their camouflage-clad Army and Air National Guard counterparts at the Spaulding Fibre site on Tuesday, First Sgt. Paul Marcinek of the CERFP team explained that deploying there in physical training uniforms, commonly known as PT clothes, is all about speed and safety.

“It’s faster, and safer for the soldiers and airmen,” he said. “If it’s 80 degrees outside, it’s 90 degrees in the suit.” Wearing PT clothes on these missions has been their standard operating procedure, said Marcinek, who hails from Holyoke, Massachusetts.

The PT clothes are more comfortable to wear under the protective gear, said Sgt. Michael Palmer, of Lynnfield, Massachusetts.

“You can get pretty dehydrated in these suits,” he said.

Apart from the rubble pile and troops in PT clothes, the Spaulding Fibre site looked like a typical field problem on Tuesday, complete with dirt now churned to glutinous ooze by rain and vehicle traffic. The CERFP team members had no dry place to stand while pulling on their suits and rubber boots.

But Palmer said he preferred the rainy and colder weather.

Exercise Vigilant Guard is a national exercise sponsored by the National Guard Bureau and United States Northern Command. The Spaulding Fibre Site is just one area being used for the exercise, which more than 1300 National Guard troops and hundreds of local and regional emergency response professionals are taking part in.