Scenario Built on Possibility of Earthquakes 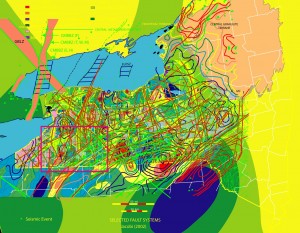 This map illustrates the earthquake fault lines in Western New York. An earthquake in the region is a likely event, says University of Buffalo Professor Dr. Robert Jacobi.

TONAWANDA, NY -- An earthquake in western New York, the scenario that Exercise Vigilant Guard is built around, is not that far-fetched, according to University of Buffalo geology professor Dr. Robert Jacobi.

When asked about earthquakes in the area, Jacobi pulls out a computer-generated state map, cross-hatched with diagonal lines representing geological faults.

The faults show that past earthquakes in the state were not random, and could occur again on the same fault systems, he said.

“In western New York, 6.5 magnitude earthquakes are possible,” he said.

The exercise was based on an earthquake scenario, and a rubble pile at the Spaulding Fibre site here was used to simulate a collapsed building. The scenario was chosen as a result of extensive consultations with the earthquake experts at the University of Buffalo’s Multidisciplinary Center for Earthquake Engineering Research (MCEER), said Brig. Gen. Mike Swezey, commander of 53rd Troop Command, who visited the site on Monday.

Earthquakes of up to 7 magnitude have occurred in the Northeastern part of the continent, and this scenario was calibrated on the magnitude 5.9 earthquake which occurred in Saguenay, Quebec in 1988, said Jacobi and Professor Andre Filiatrault, MCEER director.

“A 5.9 magnitude earthquake in this area is not an unrealistic scenario,” said Filiatrault.

The area’s old infrastructure is vulnerable because it was built without reinforcing steel, said Filiatrault. Damage to industrial areas could release hazardous materials, he added.

Exercise Vigilant Guard involved an earthquake’s aftermath, including infrastructure damage, injuries, deaths, displaced citizens and hazardous material incidents. All this week, more than 1,300 National Guard troops and hundreds of local and regional emergency response professionals have been training at several sites in western New York to respond these types of incidents.

“I’m proud of the National Guard for organizing and carrying out such an excellent exercise,” he said.