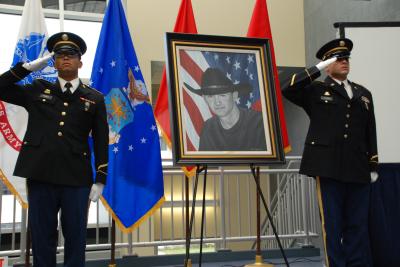 Sgt. David Fisher was killed in Iraq on Dec. 1, 2004 when his humvee rolled over on patrol.

But for Texas artist Phil Taylor, the New York Army National Guard Soldier was very much alive again, as he created a portrait of Fisher in October, 2009.

“That’s hard to understand for someone who is not going through the experience. In our perspective and experience they feel still alive because they are with me in the studio as I am painting,” said Taylor, who has done 50 of these portraits for the American Fallen Soldier Project.

Vicki DiMura, David Fisher’s mother, experienced a similar feeling on Friday, Nov. 13 when she saw Taylor’s labor of love for the first time at a ceremony held at New York Division of Military and Naval Affairs headquarters.

“It was the mischievous little smile that was on his face that definitely made me say that’s him,” DiMura said. “He’s there like, ‘Hey mom I’m looking at you.’ ”

The Friday ceremony was the forth time that the American Fallen Soldier Project has honored a New York Army National Guard Soldier. Other portraits have honored Spec. Jason von Zerneck and Sgt. 1st Class Joseph McKay; killed in Afghanistan in 2008, and Sgt. Christian Engledrum, killed in Iraq shortly before Fisher died.

Presenting the portraits to the families is the culmination of each 80 to 90 hour effort, Taylor said.

It’s a way for a “simple artist” to give back to those have given so much, he explained.

DiMura, who now works for the New York Army National Guard on the Family Program staff, asked to have the presentation at DMNA headquarters.

“We are very honored and humbled that you are allowing us to share this moment with you and yours,” Major General Joseph Taluto, the Adjutant General, told the DiMura and Fisher families.

He didn’t know Sgt. Fisher personally, Taluto said, but he knows what it takes to be a Soldier and that means David Fisher was a man of character who lived the army values of honor, loyalty and personal courage.

He had joined the National Guard in November 2001 and served in the 1st Battalion 101st Cavalry. The American Fallen Soldiers Project, started by Taylor and his wife Lisa, is a 501 3 non-profit organization committed to honoring the memory of fallen military personnel by presenting the next of kin with custom portraits of their late loved one at no cost. From its website is the following statement from the artist to family members of fallen service men and women: "It is my desire that each portrait I produce translate the deep appreciation I have for your beloved’s service and sacrifice to our nation.,’ Taylor said. The project is supported by American Airlines which transports the portraits and the artist free of charge from Texas to locations around the country for in-person presentations. Since its inception in 2007, the artist has completed nearly 50 paintings that have been presented to families across the nation.