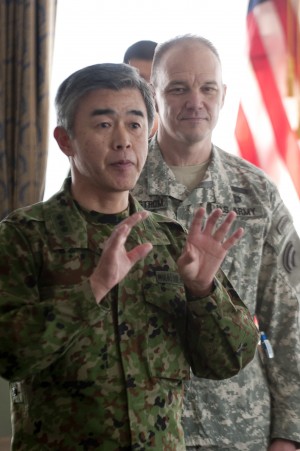 Lt. Gen. Yoshikazu Watanabe, commander of the Japan Ground Self Defense Forces’ 2nd Infantry Division congratulates members of the Army National Guard at Camp Chitose, Hokkaido Japan during the National Guard Birthday celebration here Dec 13. "Thank you for your cooperation and support during this Yama Sakura training exercise," Watanabe said. "Your work during our two division’s passage of lines was very successful. A very happy birthday to you and the National Guard." The National Guard commemorated 373 years of service to the nation with a ceremony here during Yama Sakura 57, the bilateral joint command post training exercise. The ceremony was hosted by the New York Army National Guard’s 42nd Infantry Division, the partner unit of the JGSDF 2nd Division. US Army photo by Sgt. Gerry Deavila, 124th MPAD.

The ceremony included Lt. Gen. Benjamin R. Mixon, the Commanding General of US Army Pacific (USARPAC) and leaders from the Japanese Ground Self Defense Forces’ 2nd Infantry Division and 7th Tank Division. The two Japanese military leaders were partnered with the 42nd Infantry Division leaders and staff during the battle simulation exercise.

"Just look down at your nametape on the left side of your uniform and that will tell you everything you need to know," Mixon said to the nearly 100 Soldiers present for the ceremony, timed to occur right at as Dec. 13 reached Eastern Standard Time from Japan. "It says U.S. Army and we’ve been one team and one fight for a very long time."

"I’m proud to have had the 42nd Infantry Division here with us for Yama Sakura," he said.

"Thank you for your cooperation and support during this Yama Sakura training exercise," said Lt. Gen. Yoshikozu Watanabe, commander of the JGSFD 2nd Infantry Division said to Brig. Gen. Steven Wickstrom, the 42nd Infantry Division Commander and the assembled Soldiers. "Your work during our two division’s passage of lines was very successful. A very happy birthday to you and the National Guard."