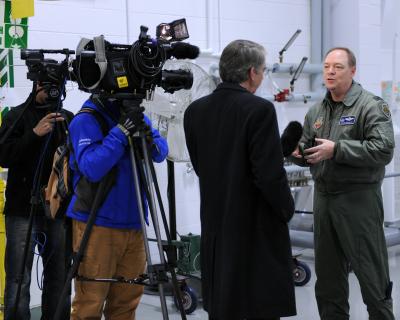 The New York Air National Guard wing invited members of the local Syracuse media to attend a MQ-9 media roundtable on the 17th of December, as well as having the opportunity to interview members directly involved with MQ-9 operations.

Col. Kevin W. Bradley, 174FW Commander hosted the event, which started with an updated mission brief, then was followed by the opportunity for questions and answers.

"The men and women of the 174FW are extremely proud of the fine heritage of this unit and they equally excited about operating this cutting-edge technology", said Bradley.

After that media members were brought to the MQ-9 Maintenance Field Training Detachment to conduct interviews with a pilot, sensor operator and an intelligence officer.

"I am extremely proud to be doing this mission and supporting those American and Coalition forces on the ground", said Staff Sgt. Alex, 174FW Sensor Operator. Staff Sgt. Alex served with the US Army, prior to joining the 174FW; this experience gives him an added sense of job satisfaction because of the support he can give to his brothers-in-arms on the ground. It is this sense of connection to those on the ground that rings through on how important their job is.

"With the ability of this aircraft to loiter over an area for 10 to 14 hours we have the ability to create a great overall picture for those American and Coalition Forces on the ground", said Capt. Chris, 174FW Intelligence Officer.

"Because of this incredible ability to loiter over an area for an extended period of time we feel a greater sense of connection to those forces on the ground", said Capt. Chris.

They were also given the opportunity to observe a training class being conducted by 174FW instructors. This class had the first two non-Hancock Field members among the class as there were two active-duty members from Holloman, AFB, NM.

Immediately following the FTD session the media were escorted to the flight line to see the MQ-9 up-close and have the opportunity to see the aircraft power up its engine.

"What we do is simple, 95% Intelligence, Surveillance and Reconnaissance and 100% support to those American and Coalition forces on the ground", said Lt. Col. Mike, 174FW pilot.