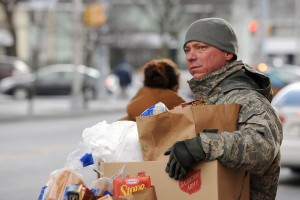 US Air Force Tech. Sgt. Christopher S. Duffy prepares to carry a box of food items to a car at the Oncenter Complex in Syracuse, NY on 22 Dec. 2009. Addley was volunteering at the Annual Christmas Bureau Salvation Army Food and Gift drive supplying needy families with gifts for their children and food for their Holiday meal. (Photo by Tech. Sgt. Jeremy M. Call, 174th Fighter Wing (Released)

With more than 4,000 families from the Syracuse area experiencing hard times during this holiday season members from the 152nd Air Operations Group and the 174th Fighter Wing once again answered the call of the Christmas Bureau Salvation Army’s distribution day.

"Without the members of Hancock Field Air National Guard Base we would not be able to pull this event off. From the logistical support in setting up the distribution line to the actual volunteers from the unit, their support is essential in this day being a success", said Linda Wright, Salvation Army Syracuse Executive Director.

Of the 4,006 families who showed up at the Oncenter today, to receive food and toys in an effort to make their holiday season a little brighter, 65% of those families have never had to solicit this kind of help in the past, Wright said.

According to Wright the Salvation Army has been involved with the Christmas Bureau distribution day for more than 30 years. She went on to add that this year there has been an increase of 1,000 more families requiring this assistance, while 2008 increased by 500 families from 2007. In this time of the season when hope is the theme, it is very special that we are able to give those families some of it even if it is for only one day, Wright said.

Families began entering the Oncenter at approximately 1030 to begin the process of validating their registration information and ensuring that all of the supplied data was accurate. Those families with children who registered for toys began their shopping from a wide assortment of donated goodies. In one of the large rooms at the Oncenter toys, books and stocking stuffers were separated into categories and those families could pick out something that they thought their child would like.

"Each family is given a personal shopper to assist them with picking out a toy for their child (children). We try to make sure that there are enough toys for every age category according to sex so the parents can have a choice of toys to pick from", Wright said.

The amount of time to prepare for this event is enormous, in fact speaking to Maj. Edward Cook, 174FW Salvation Army Distribution Day Project Officer the planning takes a full year of coordination between his staff of helpers and the members of the Salvation Army.

"We normally do a hot wash in January to discuss what went right and wrong with the previous distribution day. The information we gather during this meeting gives us the plan of action for the upcoming distribution day. So this one day takes about a year to plan, but it is well worth it", Cook said.

The items for the distribution day were collected by various organizations and companies from the Syracuse area to include Hancock Field ANGB, who had their pick-up day on the 12th of December. Hancock Field ANGB visits numerous schools in the Syracuse area as well as setting up a drop-off point in the Shoppingtown Mall located in DeWitt. The items for this distribution day were brought to the Oncenter on the 16th of December with approximately 50 to 100 volunteers helping to sort out the donations daily.

The Oncenter convention area is divided into two sections, on the right are all of the toys, books and stocking stuffers and on the left is the food processing area. Each family is given a box of groceries in a well orchestrated process that is manned by volunteers from various organizations and companies from the Syracuse area, to include Hancock Field ANGB.

Volunteers sort the food into categories such as; main dish, soup, fruit and desserts just to name a few, and those items are gathered into bins, which are staged at various points along the assembly line in the food processing area. Volunteers then stuff the boxes as they roll past with the food items, ensuring that each box has one item from the many food categories. As the box rolls along members of Hancock Field ANGB help to off-load the groceries into an awaiting vehicle that is parked along the curb.

"When I first joined the Air National I wanted to help not just my country, but also my community, family and friends. This distribution day is a way for me to give back to my community, since I am not deployed defending my country", said Airman 1st Class Allison Seguin, 174FW volunteer.

Seguin went on to say that this is her first year volunteering for the Christmas Bureau Salvation’s Army’s distribution day, as she has only recently returned from basic training, but is already looking forward to helping next year.

"This event to me is a great way to get involved with the community and is something that is very important to me as a member of the Air National Guard", Seguin said

The actual food processing assembly line was set-up and in place on Monday, as well as all of the bins and pallets of food items in their pre-positioned locations. Later on this evening we will begin to clean up the Oncenter, so that tomorrow we are ready to dissemble all of our equipment, said Cook. He went on to add that they will take a few weeks to catch their breath and reflect on the joy they were able to bring to these families and then get together in early January to start planning for next year.

"We have approximately 600 families that are coming through every hour and more than 800 volunteers here today at various times to help with this event. It is a lot of work, but for me to see the smile on a young child’s face who might not have had a present if not for this day, makes it all worthwhile for me", Cook said.