All New Yorkers Who Served Entitled to Funeral Honors 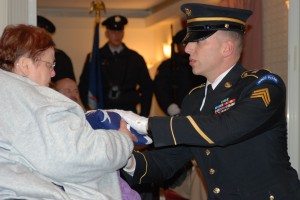 LATHAM, NY (12/24/2009--All New Yorkers who have served in the military, even if they never served in combat zone, are entitled to receive military honors at their funerals according to Donald E. Roy, director of the New York State Military Forces Honor Guard.

In order to spread that word, the Honor Guard will buy advertising in the obituary section of The Times Union to inform former service members and their families of the honors available to them.

The advertisements will remind families that their loved ones are entitled to these honors regardless of where they served and how long. The ads are being placed in the obituary section because older people tend to read them regularly.

In 2009, the Honor Guard performed honors at over 10,400 funeral services, mainly of World War II veterans, across the state.

"It’s very important that we render the appropriate honors to military veterans, no matter if they served in a time of war or peace," said Sgt. Jason A. Daniels, a team leader for the Military Forces Honor Guard with the C Co, 2nd of 108th Infantry Division in Hoosick Falls.

All former service members with an honorable discharge are guaranteed by law at least two Soldiers to provide modified honors that consist of the playing of Taps and the folding of the flag, which is then presented to the next of kin.

These modified honors are offered to the families of veterans at no charge to the family or the funeral home, and allow a grateful nation to pay final tribute to service members who, in times of war and peace, stood strong in defense of the United States of America, Roy said.

"Even if a member of the military served during a peacetime and never had the opportunity to venture overseas, it’s still very important that we renders honors to them," said Daniels, a veteran who served in Iraq. "They were still part of the less than one percent of our country who volunteered and put their lives on the line. They took the same oath that I did."

"There are many veterans whose funerals were held without honors in past years simply because their families didn’t know they were available, and it’s a shame," said Roy. "The last thing I want is for any Soldier or veteran to go without the honors they deserve," he added