Twenty Soldiers from Company B 2-108th Infantry to Participate 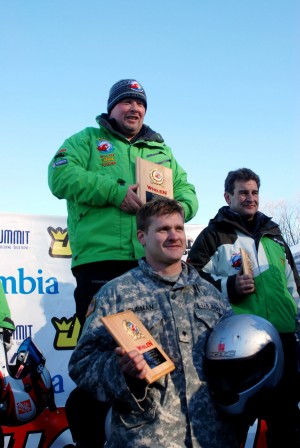 Specialist Patrick Furman, an Ithaca resident and an Soldier from the New York Army National Guard’s 2nd Battalion, 108th Infantry Regiment, displays a 1st Place plaque he received as a brakeman during the 2009 Geoff Bodine Bobsled Challenge. Standing above and behind Furman is the 2009 race winner Todd Bodine, a former NASCAR driver.

The Soldiers, member of Company B, 2nd Battalion 108th Infantry, will be serving as brakemen for professional drivers from NASCAR and the National Hot Rod Association (NHRA), who will be competing against each other.

It’s the third time that New York National Guardsmen have been part of the bobsled teams competing in the Geoff Bodine Bobsled Challenge.

The race, organized by former NASCAR champion Geoff Bodine, the winner of the 1986 Indy 500, is held to race money to support the Bo-Dyne Bobsled Project Inc.

The Bo-Dyne project is an effort by Bodine and race-car designer Bob Cuneo of Chassis Dynamics in Oxford, Conn. to create made-in-America bobsleds for the United States men’s and women’s national bobsled teams.

This will be the fifth year for the race, held at the Mount Van Hoevenberg Sports Complex where the 1980 Winter Olympics bobsled racing took place. The .almost mile-long track incorporates 20 turns and bobsled speeds can reach almost 100 miles an hour.

Getting the Army National Guard involved was Bodine’s idea.

“As a son of a WWII veteran and a former Army National Guardsmen, I thought we needed some brave people to ride with these drivers and there’s no braver folks than our men and women in the U.S. military,” Bodine said during the 2009 race.

In 2006, Bodine approached U.S Bobsled National Team Coach Bill Tavares, who is also a 26-year veteran of the Army National Guard, about bringing the Guard into the nationally televised event.

“I approached the unit in nearby Saranac Lake to see if I could get them to come over,” Tavares said. From there, the request was routed through regional recruiters and the Guard was officially on board.” In the first year, Iraq veterans and their families were invited to the event. In other years National Guard recruits and combat veterans have served as brakemen, helping to launch and stop the sleds.

“For the participants, it was a once-in-a-lifetime experience and the coverage the Guard receives is phenomenal...international,” said Major David Palmieri, the organizer of the National Guard’s 2009 effort.

The racers like having the Guardsmen participate. “I think they’re crazy,” said NASCAR driver and former bobsledder Boris Said, during the 2009 race. “I think it’s probably safer in Iraq than it is getting into the back of a bobsled with us.”

This year’s race NCOIC is Sgt. Dwayne White, who is based at the New York State Armory in Morrisonville. He reached out to members of Company B who drill at the armory to participate in this year’s event.

Along with Guardsmen serving as brakemen-the rider responsible for dropping the metal hook that digs into the ice to slow the sled-White will have a team of recruiters at the event.

The recruiting exhibit will include a replica of the #88 National Guard Card driven by Dale Earnhardt Jr. and a National Guard Indy car simulator that allows a visitor to experience the thrills of racing through video and sound.