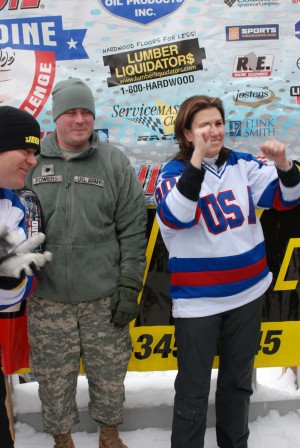 "I decided it was an excellent way to meet NASCAR drivers and go bobsledding, said Spec. Kristopher Fetter. " It shows people some of the excellent opportunities you have when you sign up for the Guard," he said

Fetter and 19 other members of Company B 2nd Battalion, 108th Infantry, headquartered in Morrisonville, NY, served as brakemen on bobsleds driven by NASCAR and National Hot Rod Association drivers down the Olympic bobsled track here.

The Soldiers helped start the sleds and were then responsible for engaging the brake that stopped them at the end of the almost one-mile run down the Mt. Van Hoevenberg track.

"It is awesome knowing you can trust these guys to be on their A-game back there,’": said NASCAR driver Joey Logano, two-time winner of the NASCAR Toyota All-Star Showdown. "To have someone like that behind you gives you more confidence going down the hill," he added.

Since the New York Army National Guard Soldiers began racing in the Bodine Challenge three years ago the state Recruiting and Retention Command has been using the unique partnership as an opportunity to showcase a different dimension of the Guard.

"For the potential candidates who might want to think about the National Guard, this is an opportunity to see a different side of what we do," said Staff Sgt. Dwayne White, one of the Guard organizers. "They get to see that we’re not all about going into combat. We are also about taking care of our communities," he said.

"It is just another opportunity that a soldier has to do something that they will never do the rest of their lives," Van Pelt added.

The Bodine Bobsled Challenge was created by NASCAR legend Geoff Bodine to promote awareness and raise funds for the Bo-Dyn Bobsled Project, Inc., a corporation dedicated to pioneering the fastest bobsled technology for World Cup and Olympic competition.

During the multi-day event, drivers from NASCAR and the National Hot Rod Association drive identical sleds down a bobsled track reputed to be one of the fastest and most challenging in the world.

While an Olympic venue might not be the most likely place in the world to see soldiers in ACUs, for former New York Army National Guardsman Bodine the fit was a natural. "We needed someone to ride with these race car drivers and someone said, ’Let’s get the military involved.’ I said that I used to be a National Guard guy right here in New York and it just went from there," he said.

In 2006, Bodine contacted U.S. Bobsled National Team Coach Bill Tavares, a 26-year veteran of the Army National Guard assigned to the World Class Athlete Program. From there, the request was routed through military channels. Within a short time, the approval was received and the partnership underway.

As a recruiting tool, there are few more effective, with news reports of the unique competition prominently focusing on the Guardsmen’s participation, appearing throughout the nation and extensive coverage of the event appearing on both the SPEED Channel and NASCAR.COM, White said.

The Guard Soldiers are also encouraged to bring their families to watch the competition and attend receptions and dinners after the day’s racing are done.

"They (The National Guard Soldiers) do so much for the country and for all of us. I think it is a great tribute to give something back to them," said the first woman driver to participate in the Bodine Challenge, Melanie Troxell. The rookie slider would ultimately emerge as winner of the Bo-Dyn Challenge Race.

After fast times and a few flips, would the Guardsmen do it again?

"You get to ride on a bobsled, be a brakeman for the drivers and have a good time for the weekend," commented Spec Michael Graham. "They said I would have a lot of fun and I have so far," he said.