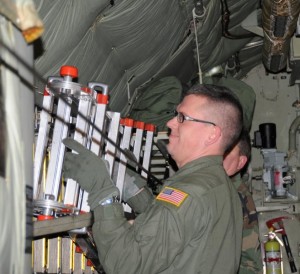 NIAGARA FALLS AIR RESERVE STATION, NY--In the early morning hours of Jan. 16, Master Sgt. Scott Dixon, a AW C-130loadmaster with the 107th Airlift Wing secured the cargo area for take-off as they prepare to leave on a mission for Haiti. He will spend the next five days airlifting supplies in to the affected area. Photo by Senior Airman Peter Dean, 107th Airlift Wing, New York Air National Guard

"We’re going down to help people in dire need right now," said Master Sgt. Szpaicher a Crew Chief with the 107th . "We’re trying to give the people some kind of comfort and relief," he added.

"This mission has a true meaning to it," said Szpaicher. "We’re going down there to make a difference," he added.

The five-day mission is slated to have the C-130s shuttle back and forth from Port-au-Prince to Homestead Air Reserve Base, Fl., where the C-130s will be resupplied. This on-going mission will not only supply the inhabitants of Haiti but also the thousands of rescue workers on scene.

"I’m extremely proud that the men and women of the Niagara Falls Air Reserve Station have been tapped to provide aide and comfort to the people of Haiti in their hour of need. My heart, and the heats of all New Yorkers go out to the Haitian people in this moment of crisis," said New York Governor David Paterson. "I know that these New Yorkers in uniform will perform exemplary service during their mission."

This joint mission would not have been possible a few years ago. In response to the BRAC decision of 2005 the 107th AW converted from a KC-135R an air refueling wing to a C-130 airlift wing. Now associated with the 914th AW both units work together for one common goal, to provide fast, reliable worldwide airlift.

"Both units have been tasked to support this mission, it’s a combined effort between the New York Air National Guard and the Air Force Reserves," said Col. Patrick Ginavan, Commander of the 107th Airlift Wing. "This is a perfect example of a successful Air Reserve Component partnership," he added.

"The 914th and the 107th train daily for airlift missions. We fly, plan, maintain and load plans daily’" he said.

"This mission validates our training," Ginavan added. "It’s rewarding to validate what we practice day-in, day-out."

Whether it’s a world contingency or a humanitarian effort, the men and women of the Niagara Air Reserve Station have a history of being ready and able when called upon , Ginavan said.

"We had so many of our Airmen volunteer, we had to turn people down," he said.. "We’re very proud of our guys."

The C-130 Hercules is the United States Air Force’s standard intra-theater cargo aircraft and is used heavily by air forces around the world. It is capable of getting into and out of short and unimproved runways.

The C-130, powered by four turboprop engines is normally operated by a crew of five or six, a pilot and co-pilot, navigator, flight engineer, and one or two loadmasters in the back. The version flown by the 107th Airlift Wing has a top speed of 366 miles per hour and a range of about 2,000 miles with a payload of around 35,000 pounds.

The aircraft can carry up to 92 people or six pallets of cargo depending on the configuration and load and unload through a ramp at the rear of the aircraft.