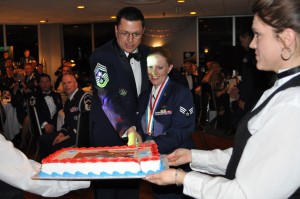 “I congratulate each nominee and award winner on a job well done,” said Col. John Bartholf, EADS Commander. “The level of excellence and expertise that we have here impresses me on a daily basis. From both the support and operations directories, the award winners represent the individual, distinguished accomplishments that set our unit out from the rest.”

The Air force Band of Liberty performed at the ceremony, along with traditional bagpipers. The event was held at Dibbles Inn, Vernon N.Y. The formal event was attended by approximately 150 people.

The main organizer for the event, Chief Master Sgt. Paul Cox, EADS Operations superintendant, said that the banquet was inspired by all of the award winners for all of their hard work.

“The real winner in all of this is the New York Air National Guard, the Air Force and ultimately the United States of America, because we would not be the world class organizations that we are without the people that we recognized at the banquet,” said Chief Cox.

Highlights from each of the award winners’ biographies detail their distinguished accomplishments.

Capt. Cetrone is a commissioned officer with over 18 years of service to his nation. He has supported Operations IRAQI and ENDURING FREEDOM. In 2007, he attended Sensor Management Officer School where he earned Distinguished Graduate honors. He was named Company Grade Officer of the quarter for the 330th Combat Training Squadron in 2006. In 2007, he was named Instructor of the Quarter for the first and third quarters. He completed his assignment at the 116th Air Control Wing with over 1400 hours on the E-8 Joint Surveillance Target Attack Radar System, or JSTARS. His medals include the Air Force Air Medal, Air Force Commendation Medal (one oak leaf cluster), Army Commendation Medal (one oak leaf cluster), Army Achievement Medal (one oak leaf cluster), Army Good Conduct Medal, National Defense Service Medal, and the Global War on Terrorism Service Medal.

In April 2008, Sergeant Warner he transferred to EADS from the Wyoming Air National Guard unit in Cheyenne, Wyo. He initially accepted responsibility as the Non-Commissioned Officer in Charge of Network Operations. He has since been selected to serve as the Superintendent, Cyber Operations Flight. He is a senior noncommissioned officer with over 24 years of service to his nation. His decorations include the Air Force Meritorious Service Medal, two Air Force Commendation Medals, Air Force Achievement Medal, two Outstanding Unit Awards with Valor and the Air Reserve Forces Meritorious Service Medal.

Senior Airman Price first deployed to EADS in August 2008 as augmentee in support of the unit’s 24-7 operations. She came to the unit from the 608th Combat Operations Squadron, Barksdale Air Force Base, La. While assigned at Barksdale, she was trained as an Offensive Duty Technician. In August 2007, she deployed in support of Operation IRAQI FREEDOM and Operation ENDURING FREEDOM. She was the 608th Combat Operations Squadron Airman of the Quarter, 3rd Quarter 2007 and Airman of the Year 2007. While deployed here in August 2008, she garnered Airman of the Quarter, 1st Quarter 2009. In June 2009, she separated from active duty Air Force and joined the EADS as a Tracking Technician.

Mr. Dorfman was born in Rome, N.Y., and upon graduating from Rome Free Academy High School, he attended the State University of New York at Cortland, N.Y. After serving 13 years as a Naval Officer and Pilot, he was hired as an Air Force Civilian Employee in March 2009. He has over 16 years of service to his Nation and has received numerous decorations which include: two Navy and Marine Corps Achievement Medal, two Air Medal, two Armed Forces Service Medal, NATO Medal, two National Defense Service Medal, Global War on Terrorism Medal, two Armed Forces Expeditionary Medal.