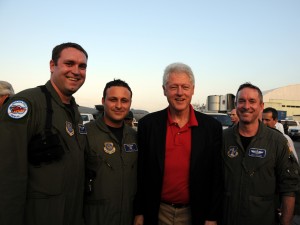 While waiting on the tarmac for medical evacuees at Port-au-Prince International Airport, Haiti, the former president’s plane parked next to Niagara’s C-130 was being readied for take-off. Shortly thereafter an entourage of security surrounded former President Clinton’s plane and within minutes President Clinton arrived. Upon his arrive former President Clinton took the time to thank the 107th Airlift Wing aircrew by posing for a photo with them.

"I’m going to frame this and give it to my grandparents," said Staff Sgt. Brian Waite, a C-130 flight engineer. "This was great," he added.

The 107th Airmen are flying missions into and out of Haiti along with Air Reserve members assigned to the 914th Airlift Wing. The two wings are associated together at Niagara Falls Air Reserve Station. The two wings share aircraft and missions.

Clinton was on his second trip to the area since the Jan 12th earthquake that ravished the region when the former president and the 107th Airlift Wing, aircrew crossed paths.

Clinton, charged with overseeing the United Nations aid mission, spent his time in Haiti meeting with government officials, visiting clinics and viewing the delivery of daily supplies. "Today, I return to Haiti to see the good progress being made by the massive relief effort and life saving work of the doctors and nurses under challenging conditions," said former President Clinton. "But while aid and assistance has greatly increased since my last visit two weeks ago, staggering needs remain and the long-term recovery has just begun," he added.

"The Haiti government has the best chance in my lifetime to slip the chains of the past," Clinton said. "I want to build the capacity of the country to chart its own course," he added.

With the meet and greet with the former president over and the evacuees on their way it was back to work for the aircrew.

All the members have their assignments and quickly got back to the mission at hand. Load masters ensured the cargo area was secure, flight engineers ensured the mechanics were operational and the pilots readied the cockpit. Within minutes after the evacuees were secure on a litter or in a seat the boys from Niagara were given the green light for take-off.

Hundreds of thousands of people perished that day and in the days shortly their after as a result of the injuries received or being buried alive. The hundreds of thousands of people that survived the devastation now find themselves in a fight for their life, scrambling for basic life sustaining needs. The Haitians will need continued world wide support for months to come.

Clinton noted that previous aid efforts have failed to improve life in the poorest nation in the hemisphere. "Too often, the aid has flowed, whether it was generous or stingy it did nothing to fundamentally increase the capacity of the country to stand on its own feet, to chart its own course, to run its own schools, run its own health care, run its own diverse economy," Clinton said. "The long road to recovery has just begun, we must all do more to save lives and help Haiti rebuild its future," Clinton said.