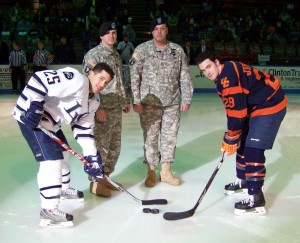 Capt. Rick Redmond and Sgt. 1st Class Robert Marshall, the commander and acting First Sgt. Of Headquarters and Headquarters Company, 2nd Battalion 108th Infanty join the captains of the Lebanon Valley College Dutchmen, Anthony Longo (left) and Utica College Pioneers, Aaron Jeffrey, in dropping the ouck to open their game Saturday, Feb. 6 in Utica. The event was part of Military Appreciation Night at the Utica Auditorium. Members of the unit along with Recruit Sustainment Program soldiers stood in formation on the ice during the singing of the National Anthem (Photo by Staff Sgt. Kevin Abbott, Joint Forces Headquarters, NY

The unit was recognized in front of the crowd gathered for a hockey game between the Utica College Pioneers and Lebanon Valley Dutchman of the Eastern Collegiate Athletic Conference Men’s West Division.

The Utica based unit stood in formation on the ice during the singing of the National Anthem and acting First Sergeant, SFC Robert Marshall and Company Commander Capt. Rick Redmond “dropped the puck” for the opening of the game.

“This is a nice gesture from the community to recognize us this way”. Said Capt. Redmond. “We appreciate them having us here tonight.” he said.

The Utica based unit has been heavily engaged in the Global War on Terrorism including homeland defense duty in the wake of the September 11th attacks and then conducting combat operations in Iraq in 2004 and in Afghanistan in 2007 and 2008. , “We have a great relationship with this community and the people who run this facility. They are always looking for ways to include the Guard in things they have going on here," said Staff Sergeant Francis Gonyea a Recruiting and Retention NCO in Utica.

Members of the Syracuse area Recruit Sustainment Program also took part in the evenings festivities both in the formation and manning a recruiting display in the lobby.

Gonyea arranged to have the National Guard sponsored #88 NASCAR race car in the building for the evening. “We have recruiting displays here for a lot of their event’s, they are very supportive”, he said.

Gonyea’s son Derek who recently enlisted was excited to be a part of the evening.

“This is my first drill as part of the RSP. “ This is something I’ve always wanted to do since I was a young kid”, said the younger Gonyea.

Derek Gonyea marks the fourth generation of their family to serve in the New York Army National Guard.

The enthusiastic crowd gave a big round of applause when the announcer introduced HHC, 2/108th Infantry.

“These are your neighbors, our finest. The Citizen Soldiers of our New York Army National Guard from right here in Utica”, he said.