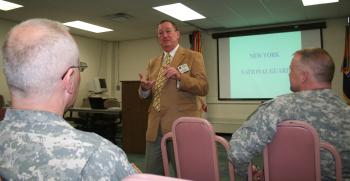 TROY, N.Y. -- Retired National Guard Maj. Gen. Gus L. Hargett, Jr. spoke to Soldiers of the New York Army National Guard on behalf of the National Guard Association of the United States (NGAUS) at the 42nd Infantry Division Headquarters in Troy, N.Y. March 6. Hargett, the former Adjutant General for the state of Tennesee, has been a lifelong member of NGAUS and now serves as president of the organization that lobbies on behalf of the Army and Air National Guard to ensure elected leaders provide for the members of the National Guard and the readiness of the force. NGAUS is focused on procuring better equipment, standardized training and a more combat-ready force by petitioning Congress for resources. Well over a century later, NGAUS has the same mission, he said. “We are the oldest lobbying organization in our nation’s capital,” Hargett told the troops, “since 1878 working to make equipment, resources and benefits available to our National Guard.” Hargett first joined the National Guard in 1962, explaining to the audience that many of the benefits commonly used by Guard men and women today were unavailable back then. “Things like PX or Commissary privileges didn’t exist back then,” Hargett said. “And Tricare for the Guard? That was unheard of. NGAUS helps make those things happen.” Servicemen and women are prohibited by federal law from lobbying politicians for benefits or resources outside of the approved federal or state budgets. That’s where the lobbying of NGAUS and it’s New York State equivalent, the Military Association of New York (MANY), comes into action. “The process and these organizations really do work,” Lt. Col. Christian Bradley, the New York National Guard Legislative Liaison officer from the Joint Forces Headquarters told the group. Armory improvements, military construction, state active duty pay, full-time manning funding, even the New York State Empire Pass for military members, all result from the leadership of these lobbying groups to put National Guard issues in front of legislators. NGAUS is a nonpartisan organization representing nearly 45,000 current and former Army and Air National Guard officers nationwide. A key aspect of the NGAUS and MANY mission is their reflection of members. Lobbying at the state or federal level for troop benefits and resources is best supported by an active and large membership of National Guard officers, NCOs and enlisted personnel. “We can be successful in DC, but we can’t be successful without you,” Hargett said. Visit www.ngaus.org for more information about the national organization or www.m-a-n-y.org for information about the Military Assoc. of New York.