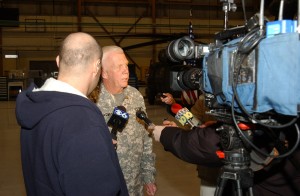 LATHAM, NY (03/12/2010)-- After a year in which they went from establishing an aerial counter-IED force for Afghanistan, to flying over watch missions during the Marines assault on the Taliban stronghold of Marjah; ten New York Army National Guard aviators are back home.

The Soldiers, who served with Task Force ODIN-- shorthand for Observe, Detect, Indentify, and Neutralize-returned to their families in the Albany area March 11 and 12.

Four Soldiers arrived by commercial airliner on Thursday March 11, while five flew into the Army Aviation Support Facility here in a military C-26 on Friday, March 12. One Soldier remained at Fort Benning, Georgia to clear up medical issues.

"It’s just great to be home," said Chief Warrant Officer 2 Dave Bowden, one of the pilots. His goal now, Bowden said, was to spend as much time as he could with his wife and children.

The Soldiers, all assigned to Operational Support Airlift Detachment 20 normally fly military personal and VIPS in Army National Guard C-12 aircraft. On this mission their job was to operate similar aircraft loaded with cameras and sensor systems designed to spot insurgents planting mines.

The original Task Force ODIN in Iraq was extremely successful in preventing IED attacks on Coalition and Iraqi forces. The ODIN aircraft would identify insurgents laying improvised explosive devices and then either guide in troops on the ground or provide information for an attack by air or mortar fire.

The Army wanted to replicate that success in Afghanistan and called on the New Yorkers, and other National Guard contingents to do the same thing.

The job facing the New York Guardsmen, when they were mobilized in March 2009, was to outfit the aircraft, test the systems, and then take them to Afghanistan, said Chief Warrant Officer 5 Kent Wagner, the detachment commander.

For the first half of their deployment the New Yorkers, the second largest contingent in the task force, trained at Hagerstown, Md. They spent six months operating in Afghanistan, based in Bagram and Kandahar, logging more than 3,800 hours in the air, Wagner said.

"There are numerous intelligence reports on IED infrastructures that were disrupted because of our operation." Wagner said.

The New York aviators played a key role in getting the task force stood up and operating, Wagner said. Two of the instructor pilots from the New York Army National Guard became command pilots, while two of the enlisted Soldiers wound up instructing others on the use of the sophisticated sensor gear.

Eventually the task force was operating six aircraft that watched out for the Soldiers and Marines on the ground.

The highlight of the deployment was providing overhead support for Marines and Afghan forces that took the town of Marjah back from the Taliban during a major assault in February, Wagner said. The New York aviators were flying three to four missions daily providing an eye-in-the sky for Marines rooting out the insurgent forces, Wagner said.

"The moral was good. The troops understood what they were doing and why," he said.