To New York Guard Soldier, the Watervliet Arsenal is more than a $100 million product line 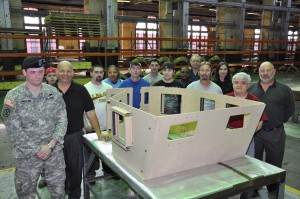 New York Army National Guard Sgt. Donald Leinfelder poses with the team that has assembled tens of thousands of armor kits for U.S. troops in Iraq, Afghanistan, and Kuwait, since 2004.

New York Army National Guard Sgt. Donald Leinfelder, a Wynantskill resident, told Arsenal employees that a humvee armoring kit they produced, prevented a rocket propelled grenade round from slamming into hime during a 2005 firefight in Iraq.

"I can’t thank you enough for what you do, because the armor kits that you have assembled may have saved my life," Leinfelder told the Arsenal production team that assembles and ships armor kits to Soldiers during a visit to the assembly line.

That little known production line has welded, fabricated, and assembled tens of thousands of armor kits for our war fighters: kits that have saved countless lives, limbs, and immeasurable heartbreak.

The last of those 15,000 gunner protective kits and 6,000 overhead cover kits will be assembled on Friday, April 16 , at the Arsenal.

"When I arrived in Iraq in 2004, we deployed with what we called ’thin-skinned’ vehicles because they did not have armor protection.

Fortunately for me, my unit up-armored my vehicle two months prior to my convoy being attacked," Leinfelder added.

Leinfelder, a vehicle gunner at the time in the 1st Battalion 69th Infantry, said his vehicle took a direct hit by a RPG grenade and he was knocked down from the gun turret. Although wounded, he returned fire as the convoy moved out of the attack zone.

"Because the armor kit took much of the blast, I was able to return to duty within 48 hours," said Leinfeld , who is currently an administrative NCO for the 3rd Battalion, 142nd Assault Helicopter Battalion in Latham.

As early as 1993, the Army identified the requirement to add armor to High Mobility MultipurposeWheeled Vehicles or HMMWV’s, according to Globalsecurity.org.

But when the U.S. Army went to war in Iraq in 2003, the many of vehicles that transported Soldiers lacked the armor protection required to mitigate the horrifying effects of a tactic employed by enemy insurgents called improved explosive devices or IEDs.

In an effort to meet the urgent requests from U.S. Central Command to up-armor more than 20,000 vehicles in Iraq, the Department of Defense turned to its industrial manufacturing base to help meet the pressing demand.The Arsenal was one of seven Army sites that was initially tasked to support this mission.

"When we received the mission in late 2004 to assemble the doors for the up-armor program in Iraq, the technical data package was in a high state of change," said Mike Ippolito, the Arsenal production planning and control program supervisor. "We had to do an emergency hire and put together a team of about 25 workers very quickly," Ippolito said.

The Arsenal’s Support Division Chief, Ray Gaston, added that this truly was a group effort that involved just about every arsenal organization to meet the emergency needs of the Soldier.

"This wasn’t a mission that we had any experience with in 2004. We, therefore, assembled a team that represented contracting, production, planning, and logistics and we had to learn as we went along," Gaston said.

"The main thing we learned, however, was to have patience with continuous improvement because requirements sometimes changed each week," Gaston said.

But the arsenal program is nearing an end of an era because the Department of Defense has moved toward newer armored-type vehicles, such as the Mine Resistant Ambush Protected vehicle or MRAP, from HMMWV’s, and is also withdrawing troops from Iraq.

Today’s arsenal armor program is managed by Kipp Zahler, and its daily operations are supervised by Jack Joslin and Steve Koza.

"We are not saying we have ’mission complete’ because we will work until the last gunner’s protection kit leaves the Arsenal, but we are nearing the end of the production schedule," Koza said.

Nevertheless, this team, which currently has 20 or so folks, has delivered thousands of armored doors, GPKs, and overhead-GPKs to troops in Iraq, Kuwait, and Afghanistan since 2004, Koza added.

Ippolito added praise by saying that despite the urgency of the mission and the ever changing requirements, the GPK team never missed a scheduled shipment. And, at the end of the day, the GPK production line assembled and shipped more than $100 million of product and was so efficient that the Arsenal returned back to the Department of Defense more than $20 million.