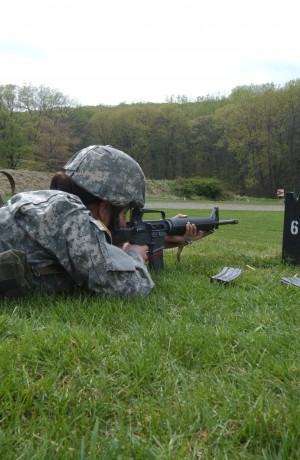 The TAG Match allows units and individual Soldiers and Airmen the opportunity to improve their level of marksmanship, engage in healthy competition, and pick top contenders to represent the state in national competitions.

The modern TAG Match allows participants to employ the weapons used on the battlefields of Iraq and Afghanistan. “I am here at Camp Smith learning something that I can take back to my unit and to build camaraderie with other New York military forces and get everyone together as one team, one fight,” stated Master Sgt. Edward J. Stefik, 107th Security Forces, Niagara Falls, N.Y., and first-time participant. “I am having a good time and it’s a good experience and maybe I will win.”

Stefik, a State Police Officer in civilian life won the top place in the individual combined arms category which requires skill with both the M-9 pistol and the M-16 rifle.

Marksmanship training and competition has long been a key component of military training. The winners of this TAG Match claim bragging rights until next year’s competition and will receive a trophy to bring home to their unit to put on display. Winners also have the opportunity to represent their state at regional and national competitions.

Participants compete in the .22 Caliber Bullseye Pistol event, the 29th Annual The Adjutant General’s Combat Rifle, Pistol, and Light Machine Gun Championships and learn how to improve their shooting skills and take those lessons learned back to their units.

“One of the biggest lessons I’ve learned from deploying units is their lack of proficiency with individual weapons,” said Maj. Brian P. O’Keefe, Headquarters, Headquarters Detachment, Joint Forces Headquarters, and state marksmanship coordinator. “There is no substitute for actual practice, real trigger time with live ammunition”.

O’Keefe added that they expected about 20 out-of-state participants, mostly from Connecticut and Rhode Island, to attend the TAG Match.

“When you look at mobilizations today, we (New York) often draw from other states to fulfill critical Military Occupational Specialties (MOS) and things we can’t fill, just as they do,” stated O’Keefe. “These are our brothers in arms, so there’s no way to say that people only from New York can shoot. We try to be inclusive, because you never know who that person on our left or right will be when we mobilize.”

As Soldiers and Airman sustain their skills on each individual weapon they use- and gain some proficiency, by coming here they know they are serious on the firing line and know that it’s all about fun off the line.

“This is a great opportunity to be here and compete against other Soldiers,” said Private First Class Tiffini J. Giraldo, 102nd Maintenance Company, Fort Drum, N.Y. “I love to hunt and fish, and I came here to fire, and do as well as I can, but most of all I am having fun and enjoying the competition.”