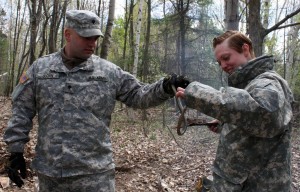 MT MORRIS, NY -- From starting fires to hunting bugs and snakes, Soldiers of the 249th Medical Company (Air Ambulance) did it all here Thursday, taking to the woods to brush up on their survival skills.

About a dozen Soldiers from the aero medical evacuation unit took part in the training near the Mt. Morris Dam. Most of the Soldiers belong to flight crews of the unit, which rescues Soldiers wounded in battle or victims of natural or man-made disasters.

In addition to starting fires, foraging and sharpening their land navigation skills, the Soldiers purified water and learned how to best utilize the equipment arrayed in their survival vests and kits.

“In a survival situation, it’s just dead weight if you don’t know how to use it,” said Chief Warrant Officer 2 David Rogers, a pilot, and native of Honeoye Falls.

Deploying to the dam area in a Blackhawk helicopter, the Soldiers quickly collected wood and water and dug a Dakota Stove, essentially a small, shallow hole that draws air through a shaft sunk diagonally into to it. This design minimizes light given off by the stove’s fire, providing for stealthy cooking and warmth. A fire also builds morale, another key element in a survival situation, Rogers said.

“When you can build a fire in an environment like this, you’ve done something big,” he said. “You’ve been proactive in your own survival.”

The soldiers treated the water with iodine tablets from their survival equipment, boiled it on the Dakota stove and filtered it, purifying it further. It was good that a bug had fallen in the water, one of them joked, since that added protein, and another said it looked like ice tea.

But the atmosphere was serious as the Soldiers learned exactly which plants and animals -- large and small -- are edible. Ants are sweet, grubs and earthworms can be washed and eaten raw, while snakes and mammals should be gutted and boiled to capture all the protein in a broth to be eaten with the meat.

Then the Soldiers broke into pairs to search the woods for these survival delaines. Spc. Larry Sloan, a crew chief, came up with a garden snake that the Soldiers skinned, gutted and boiled in canteen cup with wild leeks they had found. They shared the meat and sampled the broth, then took turns gutting down grubs and earthworms.

“Any pre-conceived notion of what’s gross you have to get rid of, and just eat to survive,” said Spc. Jared Carpenter, of Avon, a mechanic, paraphrasing the Army survival manual. “I could eat those all day,” he said of the earthworms.

Earthworms don’t compare to spaghetti, “which doesn’t move when you eat it,” joked Rogers.

Finding and eating these things, though disgusting, is necessary, said Spc. Barbara Morgan, of Clifton Park, a flight medic.

“Once it was over it wasn’t so bad,” she said. “I could do it again, if I had to.” She’ll be doing survival training after she finishes flight medic training, she added.

While survival training is an annual requirement for the unit, it’s also preparation for unit Soldiers who will have to complete a Survive, Evade, Resist, and Escape (SERE) course after they graduate from their flight crew schools, said Staff Sgt. Jose Nobrega, of Brockport, a crew chief.

Staff Sgt. Edward Kieda, a crew chief from Phelps, took part in the training as well. An Iraq war veteran with about 37 years in Army, mostly with various Rochester-based National Guard aviation units, Kieda saw the exercise as refresher training -- and a confidence builder.

“It let’s people know that if they have to survive, all is not lost,” he said.