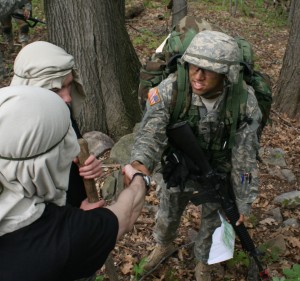 ROTC Cadet Jonathan Roman, right, greets role-players who will guide him through a simulated minefield during Operation April Venom, which took place from April 29 to May 2. The role -players acted the parts of host-nation citizens to test the cadets’ cultural awareness and negotiating abilities.

ITHACA, NY --- Tempering the leadership mettle of tomorrow’s Army officers was the objective of Operation April Venom, held here from April 29 to May 2.

The exercise was mainly mental for the cadets as they commanded squads and platoons on tactical lanes designed to test their leadership skills and ready them for Warrior Forge, a five-week evaluation course all cadets must undergo before receiving their commissions. The training stressed decision-making -- under the stressful conditions they should expect to encounter in a real-world operating environment.

In addition to planning and executing combat missions, the cadets had to react to snipers, mortar fire, casualties, media and civilians on the lanes --- all simulated by other cadets and officers.

Dealing with multiple situations teaches cadets to stay focused and not freeze up, said Cadet David Jakubiec, an RIT senior who helped facilitate the training and walked the lanes with cadets. They sometimes have to make decisions with little or no information, he added.

“We’re about building decision-makers,” he said. “We can’t tell them everything, but we can teach them to keep making decisions.”

The scenario in one lane, for example, called for the cadets to encounter civilians who were mistreating a prisoner, Jakubiec said. Applying cultural awareness and negotiating ability, the cadets were tasked to stop the mistreatment, he explained.

“We try to give them situations which force them to apply the Army values and the ethical decision-making process,” Jakubiec said.

Cadet leaders were evaluated on their leadership attributes after completing the lanes, including their adherence to Army values, mental agility, response to stress and judgment.

“It’s stressful,” said Jonathan Roman, a Cornell junior who led a platoon on an ambush mission. “You’re graded on making good, confident decisions quickly. The more experience I get, the easier it is for me to make decisions.”

The training was great, and taught her to continually look to the next step, said Cadet Kathleen Minor, an RIT junior. They also learned how to adapt Army doctrine to the various situations, she added.

“It’s one thing to learn Army doctrine and tactical knowledge, it’s another to apply it in real life,” she said.

He joined the 105th Military Police Company in 2006, and joined ROTC right after that so he could stay with the unit, Pedicone said. He took command of a platoon within two months, held the position for two and half years and passed Warrior Forge in 2008, he recalled.

Leaders can best deal with the simultaneous situations by focusing on the objective and effectively using subordinates, Pedicone said. He’s learned to rely on NCOs, who have knowledge and experience, he added.

“The NCOs are extremely important,” he said. “They’ve been there longer than any fresh cadet. If you earn their respect, they’ll work extremely hard for you.”

“I like it a lot more than for just college,” Baer said.

As a team leader on the lanes, she felt stress and worried about making the right decisions, Baer said. But that was what the training was all about, she added.

“It helps, because that’s what war is like,” she said. “I learned that making a decision and going with it is better than hesitating.”