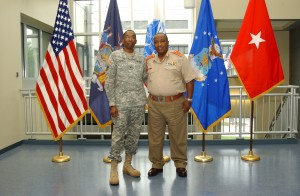 “South Africa learns a lot from this partnership,” Ngwenya said. We learn from the United States, particularly when it comes to counter terrorism.”

It was also useful to learn about the capabilities of the New York State Police, since crime is a major problem in South Africa, he added.

“It was pleasing for me to learn from Americans that we are all together here sharing information and the kinds of facilities that they have, I think we stand to benefit from,” Ngwenya said.

While the South African National Defense Force has a reserve component, it is very different from the National Guard, Ngwenya said.

South African law forbids using the reserves in the kind of local civil support role that the National Guard fills regularly in the United States, he explained.

But, he said, maybe that should change.

“We have learned from your people that you can mobilize those people any time you want,” he said.

Hosting Ngwenya and his party was just one more way to develop the relationships that are so important in the modern, globalized world, said Brig. Gen. Renwick Payne, Director of Joint Staff for the New York National Guard.

“One of the things we have discovered, as we in the United States put together a package that supports internationally, is it is important to make relationships and develop relationships,” Payne explained.

“The significance of Gen. Ngwenya coming to the United States, and us hosting him, is it shows the strength of commitment between the United States and the State of New York to support those issues that are relevant to South Africa,” Payne added.