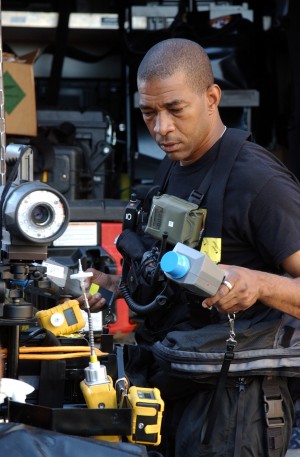 RANDALLS ISLAND, NEW YORK CITY -- The New York National Guard’s latest anti-terror unit has passed its formal validation exercise and is set for certification by the Secretary of Defense for employment against potential attacks at home.

Following a day-long exercise on June 8th conducted at the New York City Fire Department’s Fire Training Academy on Randalls Island, the 22-member 24th Civil Support Team for Weapons of Mass Destruction (WMD) has completed all training to respond to potential attacks or incidents involving the possible use of chemical, biological or radiological agents or the use of high-yield explosives.

The unit is based at Fort Hamilton in Brooklyn and is the second such unit assigned to the New York National Guard. The 24th is specifically assigned and dedicated to covering the New York City area. The highly specialized unit is the latest addition to the Guard’s homeland defense and emergency response capabilities in support of civil authorities. It is another asset that the state and city can count on to help protect lives and protect communities.

The exercise was the last step in the process to certify the 24th CST, which is part of a national program that includes 57 such units in every state and territory. Three states including New York now have two units said Cooper.

“The exercise started at 5 a.m. and will go late into the evening,” he said, adding that covered and evaluated events included the notification and deployment phase, link up with the civilian incident commander on the scene, full-spectrum WMD response, detecting and identifying agents and providing the incident commander with recommendations and additional assistance.

The scenario began with a request from law enforcement which had been conducting a stake out of possible terror suspects in an apartment building. When a resident on an adjacent floor was taken ill, the suspect apartment was raided and a clandestine laboratory was discovered. The 24th CST was called in to determine if contamination was present and to identify possible agents.

Civil Support Teams are specialized units comprised of 22 full time Army and Air National Guard professionals uniquely trained and equipped to respond to possible terrorist attacks or other events where WMDs or high yield explosive agents may have been used. On order, these units rapidly mobilize and deploy to work for the civil authorities under the national incident command system to detect contamination, identify it and assist with follow on support.

The 24th CST has been training since June 2007 following authorization for another unit specifically for New York City, which remains a primary terrorist target. Unit members also had to complete demanding service schools at various military bases in order to be certified in their specialties.

“It’s really important to have a second unit and based in New York City to speed the response time here,” said Cooper. “The 2nd CST remains upstate to cover the rest of New York while also standing ready to reinforce efforts down here as needed,” he added.

The CST program began in 1998 following federal legislation designed to help prepare the nation for possible terrorist attacks that could involve the use of WMDs. The New York National Guard played a significant role in developing it. New York was among the ten charter states to field a unit that was validated for emergency response in 2000.

Since then, the CST program has grown nationwide thus providing local support for possible terrorist attacks or other incidents with highly trained staff and state of the art capabilities. CSTs routinely conduct joint exercises with civilian fire departments and emergency response agencies. In New York, members of CSTs are often pro-actively positioned with federal, state and local security and emergency response agencies for large public gatherings including sporting events and celebrations that could become terrorist targets. CSTs are periodically tested on their abilities to perform their mission by the U.S. Army and civilian emergency response agencies are also involved. The New York City Fire Department supported the exercise for the 24th CST on June 8 by hosting the unit at its Fire Training Academy on Randall’s Island which contains 27-acres of specialized facilities to support intense disaster training through a variety of scenarios in simulated urban settings.