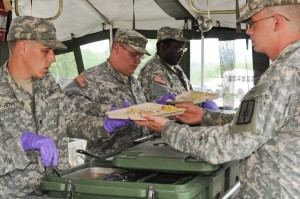 The food service specialists from the 204th Forward Support Company (FSC) from Binghamton, N.Y. had been preparing for this meal over the past two months and the rainy weather wasn’t going to stop them from serving a prize winning lunch.

The 11 members of the mess section are in the running to win the Philip A. Connelly Award of Excellence in Army Food Service. The award is designed to encourage professionalism in Army food service teams and recognize excellent performance.

"I’ve never seen Soldiers so proud of their jobs," Staff Sgt. Susanna Stacey, the senior foods operations non-commissioned officer with the 204th FSC said. "What they do they do for themselves, but they do it for the troops primarily."

The benefits of winning the competition would include cash prizes of up to thirty thousand dollars, and scholarships for selected participants to attend a culinary arts school.

"If we win that will be great," said Pfc Chad Grover, a food service specialist with the 204th FSC. "The most important thing for us is to put on a good meal for the Soldiers," he said.

Though the 204th FSC recently received new equipment, they had to borrow from other National Guard units in order to participate. Winning one of the cash prizes would better equip the unit to provide support for Soldiers across the state.

"They are getting a name within the state," Stacey said. "We have Soldiers that go down to support Camp Smith. I have two that are here right now supporting the quarry."

"As opposed to catering, they would much rather have their cooking. They have just come to know that they are going to put on a better show, and it’s going to be much more nutritious," she said.

Another reason to enter her Soldiers into the competition was the training that they would receive, Stacey said.

Rain and mud were two obstacles throughout the day that the competitors had to overcome in order to complete their mission.

"Where I see this environment really coming into play is the next time there is a natural disaster," said Daryl Moss, a chief warrant officer five and one of the competition evaluators from Bowhead Technology Services, Inc.

"How are we going to feed the Soldiers? That tent right there. It becomes a critical thing,’ he added.

The ability to maintain professionalism and safety standards were two of the elements the evaluators were looking for from the Soldiers.

"Every training environment we go into, we take something out of it," Stacey said. "We just continually build and continually build. It is today’s world so we could end up being on a plane tomorrow."

Because of the weather conditions, the 204th FSC had to spend extra time making sure the site was safe for the soldiers. Dozers and rollers were brought in to level the ground, shallow trenches were dug to drain mud puddles and lightening prevented some of the strategic coverings from being put up.

These delays put the meal behind schedule, but Stacey was sure her team would still do a good job.

"There may be some setbacks, time delays and mud, but other than that, it will be good," Stacey said. "I have total confidence in my team. They are phenomenal cooks and they just shine every time they’re up there."

The decision for the regional competition will be announced by the end of August and nationwide results will be released no later than January 15, 2011.