National Guard and NFL Team Up to Mentor Student Athletes 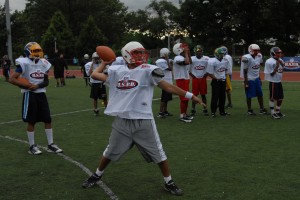 “This wouldn’t be possible without the support of the National Guard,” Goodell told the nearly 175 athletes during a break in the training, “these men and women represent all the values that we represent in the NFL and hopefully you’ll represent, and that’s why we have this partnership to make football available to you and more importantly, those life skills that we’ve talked about.”

The High School Player Development (HSDP) program, sponsored in large part by the National Guard, provides high school sophomores through seniors the opportunity to develop not only their fundamental football skills, but also teaches them how to be successful in life through character development.

“Even if you’re lucky enough to make it to the NFL, you won’t play the game forever. All the things you’ve been learning out here on this football field, on and off the field, will stay with you the rest of your life,” he said.

The program, free for the students, first came to New York in 2003 with two sites the City and about 500 student athletes and 40 football coaches.

This spring and summer, the program is expected to reach more than 20,000 high school student-athletes nationwide at more than 125 sites in 34 states.

“This is a nationwide program, it goes from New York to California,” said Jerry Horowitz, Program Director, “with the potential to theoretically reach out to 1.2 million school kids.” On-field components of the HSPD program include fundamental skill development by field position and individual competitions. As part of on-field training, players will focus on both an offensive and a defensive position, and eventually apply their newly-learned fundamentals to live drills. Participants have access to innovative teaching and drills developed by leading NCAA coaches.

“We give them a good talking to,” said Al Tongue, on site director of the program here that combined athletes from a dozen local high school football programs. “And then we talk to them about all the different life skills, about how to get it done, to improve their grades or their play.”

The athletes receive a total of 10 hours of football instruction and coaching and on-field drills over the five day session. Much of the first day is about developing successful habits and life skills. The coaches continue to reiterate and emphasize those skills in all the football drills during the camp, Tongue explained.

The HSPD program can now reach out to almost every high school football coach in the country and provide them the tools to develop the character of their players, said Horowitz.

“The NFL recognizes that not all of the program participants will someday play in the NFL,” he said, “but they all will be entering society, and we hope that we are making them better citizens.”

NFL officials recognize the great success that the program has and the wealth of unintentional opportunities and knowledge that it provides the young student athletes.

The National Guard sponsored program is not only a great opportunity for the high school athletes to learn life skills from the coaches, but also gives them the chance to meet with Soldiers and learn from them about the importance of teamwork and success.

The program recently completed a week long session in New Jersey, bringing 150 student athletes together in Jersey City for the training sessions.

A second camp is scheduled for Batavia High School 260 from June 27 through July 1st for Western New York student athletes and a third at the Field of Dreams on Old Sunrise Highway in Massapequa on Long Island from July 5-9.

“We really appreciate this partnership,” Goodell told the Soldiers from the Army National Guard’s Recruiting and Retention Command and area Recruiting Assistant Soldiers.

For more information about the youth program, visit www.nflyouthpd.com/hs-player-development/sites/NY/.