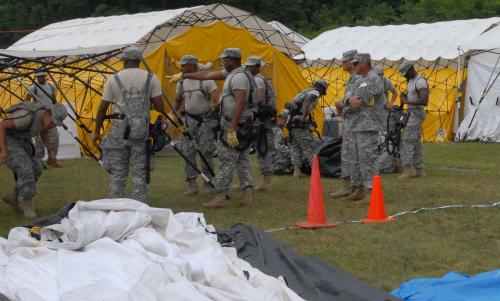 Members of the 222nd Chemical Company being setting up the decontamination line during CERFP Training on June 24 at Camp Smith. (Photo by Spec. Kevin MacNeill)

Men and women from the New York Army Nation Guard have 90 minutes to set up their equipment and get ready to treat civilian causalities once they arrive on scene. Soldiers move as fast as humanly possible to get ready to help these devastated people and attempt to save their lives.

On June 24th, members of the New York Army National Guard’s 222nd Chemical Company trained for such a scenario as part of the Decontamination element for the CERFP mission for New York State.

CERFP is the chemical, biological, radiological/ nuclear, and explosive (CBRNE) enhanced response force package. The 222nd Chemical Company is getting ready to validate as the decontamination element in the CERFP mission and is one of four elements getting ready to take over the difficult mission. The 222nd spent the day training on individual and team tasks to be ready to handle their aspect of the mission as well as become a certified member of the over all team.

Sgt. Austin Keith of Queens N.Y. and Sgt. Ruffy Galsin of Brooklyn N.Y., members of the 222nd, are both team leaders and have the responsibility for making sure their Soldiers meet the challenges of the mission.

“It’s a good learning experience to deal with this kind of training,” said Keith. “We are about to take over from another unit and I feel excited about it.” The training included set up of the decontamination tent and processing of civilian casualties in a time frame of 90 minutes.

“We have to make sure all our equipment is ready and is good to go,” said Galsin during a training break.

Despite temperatures reaching 90 degrees, Galsin’s team met the standard of the training: setting up in 45 minutes. He was happy with the over all performance of his troops, he said.

Galsin pressed his team to understand the importance of their mission and how it affects the overall success of the element.

The new commander to the decontamination element for CERFP, Capt. Thomas Hayes of the 222nd Chemical Company was eager to validate for the training.

“It’s a lengthy training process,” Hayes said. “These Soldiers have been given the task of getting ready for the mission faster than most units in the past because of the unit’s chemical background. Most units train for a year or year and a half, but the 222nd chemical company of the New York Army National Guard is almost ready for validation after only nine months.”

The 222nd will become the primary decontamination unit in the state. In the past, responsibility for the mission was rotated among units.

“Our job here is to respond and be able to assist civilian and civil authorities in any event necessary,” Hayes said. “For a chemical company CERFP seems like the right fit.”

The 222nd is just one out of four elements at Camp Smith getting ready to complete validation training to be certified to respond to disasters. This is the first time all the members of the new CERFP team will be brought together to work as one unit with four distinct parts.

The CERFP team includes members of all different backgrounds from across the state and even different branches of service, with the New York Air National Guard providing the medical personnel for the mission. The other element under his control are the search and extraction element made up of member of the 27th Special Troops Battalion from Lockport New York.

“I am confident in the Soldiers and Airmen under my command,” Gagnon said. “I know they are trained and able to accomplish the mission and be ready to answer the call of duty anywhere they are needed in the coming months.”