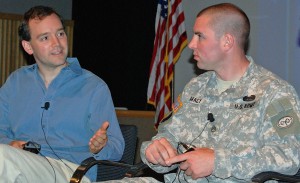 On Thursday, July 1, the Buffalo police officer watched the doctors of the Army’s 86th Combat Support Hospital fight to save his life, as the New York State Museum conducted a special screening of the HBO documentary Baghdad ER.

The opening scene of the award-winning film chronicles their struggle to keep him alive.

He’d volunteered to attend the screening, along with producer Matthew O’Neill, to talk to the audience about the film and his experiences.

“I started remembering things,” Macy said. “It gets you choked up.”

He’d seen the movie when it premiered in 2006 but had not watched it since. This time his wide Shauna, and infant son Charles were with him.

Along with the scenes of wounded Soldiers, the scenes showing Soldiers grieving for wounded and dead friends also had an impact he said.

“That affects me more than seeing the injuries,” Macy added. For O’Neill it was a chance to re-engage with a wounded warrior he first met in the middle of a war.

“We originally had approached the Army about doing a comprehensive program,” said O’Neill, explaining the initial plan was to tour all medical facilities operating in Iraq.

Producers Jon Alpert and O’Neill were embedded with the 86th during a two-month period and given unprecedented access to the staff and medical areas. They intended to stay just two days but quickly realized they didn’t have to go anywhere else to cover the story they wanted to convey.

“I had never been to a war zone before,” he said. “I learned more about war and the results of it than I ever wanted to.”

It was five years ago that fate brought them together. It was just over four years since the film had been premiered and Macy and O’Neill had last seen each other. In the time between there were other films for O’Neill and another deployment for the now fully-recovered Macy.

Today he is married, has a son and has finished his first year as a policeman. They came to Albany -- one from New York City and the other from Buffalo to re-connect, remember and speak about their experiences.

“Journalists have their own challenges when it comes to stress,” said O’Neill. “I was surprised by how upset I got while I was just watching this again,” he added.

The New York State Museum hosted a public screening of the HBO documentary on Thursday, July 1 in conjunction with its latest exhibit “Citizen Soldier in the American Century.” Baghdad ER was a ground breaking documentary released in 2006.

Showing the film and bringing the producer and soldier together was another step in the museum’s efforts to tell the Citizen Soldier story.

It was the most honored documentary that year with four Emmy Awards, a Peabody Award, an Overseas Press Club Award, the Alfred I. duPont Columbia Award and the Christopher Award for its “unflinching” look at the cost of war.

The film contains graphic scenes that are at times disturbing. When it first came out, the Army was at first concerned for the potential for emotional injury on troops and families. Instead, it is almost required viewing for the military medical community and praised from both inside and outside the military.

“Baghdad ER” chronicles the day-to-day lives of doctors, nurses, medics and chaplains as they tend to wounded and dying patients. It highlights the skill, dedication and heroism of medical professionals as they work to save lives. It also shows the sacrifices endured by America’s wounded warriors. According to O’Neill, a general officer later remarked that “it captures the soul of the Army.”

Sergeant Craig Macy was serving with the New York National Guard’s 1st Battalion 69th Infantry in Iraq in 2005. He was struck by a sniper while on a combat patrol. Thanks to his comrades who rushed to his aid and the expert medical care he received, Macy survived, recovered and returned to duty with the National Guard.

He was mobilized and deployed to Afghanistan in 2008 with nearly 1700 New York National Guard troops. He continues to serve in the National Guard and is now a police officer with the City of Buffalo. Following the birth of their son, Craig and Shauna named him Charles in honor of then-Major Charles Crosby who pulled Craig to safety back in 2005.

The screening on July 1 was the first in a series of special programs that the New York State Museum is planning in conjunction with the “Citizen Soldier” exhibit, which runs through March 2011. The exhibit and the film convey the service and sacrifice of members of New York’s National Guard at war.