’Restrepo’ comes to the State Museum 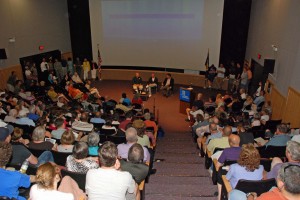 New York State Museum’s Huxley Theater was filled on July 6 for “Restrepo” and a question and answer period with one of the film’s producers and one of the featured soldiers.

NEW YORK STATE MUSEUM, ALBANY, NY -- The award-winning documentary "Restrepo" by Sebastian Junger and Tim Hetherington played to an over flow audience at the New York State Museum in Albany on July 6.

More than 300 packed the museum’s Huxley Theater and into an adjacent viewing area to see the 90 minute film and hear from Tim Hetherington and one of the featured combat veterans, Brendan O’Byrne. The public screening is the latest in an ongoing series of special programs and events at the museum following the May 28 opening of its latest exhibit -- "The Citizen Soldier in the American Century," about the New York Army National Guard. The exhibit runs through March 2011.

"We wanted to bring home the reality of what Soldiers go through in Afghanistan," said Tim Hetherington, co producer and photographer during a question and answer period that followed the viewing. "We wanted to make the most visceral and experiential war film we could," he added.

"Restrepo" chronicles the combat experience of a platoon of American Soldiers assigned to the Army’s Company B, 503rd Parachute Infantry Regiment, 173rd Airborne Brigade based in Vincenza, Italy. The film showed how the Soldiers fight the hidden and elusive Taliban from a remote outpost named after one of their fallen comrades. They constructed their base under the noses of the enemy one a ridge line inside the most dangerous region of Afghanistan -- the Korengal Valley.

In 2005, Sebastian Junger was in Southern Afghanistan and was introduced to "Battle Company" and was impressed with them. He decided that if the unit would ever be redeployed he wanted to cover them for an extended period, which was not the usual scenario at that time for embedded news reporters, explained Hetherington.

So when the unit was again deployed in 2007 to Afghanistan, Junger and Hetherington embedded with them for several extended periods lasting weeks at a time. They accumulated more than 150 hours of video and Junger published his latest book "War" that goes along with the film. Hetherington will soon be releasing his own book of images captured during the same period.

"We understand that what Soldiers go through should be seen, digested, understood and in some ways honored," added Hetherington.

"The Citizen Soldier exhibit is not about war. Its’ about service and sacrifice," said Dr. Clifford Siegfried, the director of the New York State Museum who welcomed the audience. The Museum’s mission is not only to educate, but to provide a forum for discussion of topics important to our community. Screening the film is consistent with that mission, he said.

"Restrepo" explores the character and relationships of a tight team of warriors fighting and living at the extreme edge in America’s ongoing war. It holds nothing back, including the tension and emotional impact of fear, loss and the rush that the Soldiers experience as they dodge bullets and return fire. Candid and tightly framed interviews of individual unit members that were filmed after the unit had returned to their base in Italy not only help fill out the story but offer a window into each warrior’s personal pain.

"While the film is not about a New York National Guard unit, it does relate to the common experience of New Yorkers who served in Afghanistan," said retired New York National Guard First Sergeant Troy Steward from Buffalo. He served on an Embedded Training Team to the Afghan National Army in 2006 along with other Guard members. His son, also a Guard member, deployed with New York’s 27th Infantry Brigade Combat Team to Afghanistan in 2008.

Steward publishes the military blog site www.bouhammer.com which co-sponsored the presentation at the museum. He was on hand to introduce the film and later facilitated the question and answer period. Many serving members of the New York National Guard, mostly Iraq and Afghanistan veterans attended the viewing.

"I think ’Restrepo’ fits well with the Citizen Soldier exhibit and ought to be required viewing for troops heading to Afghanistan in the future," said Steward. "Tonight’s turn out has been great and what the State Museum is doing is a tremendous public service," he said.